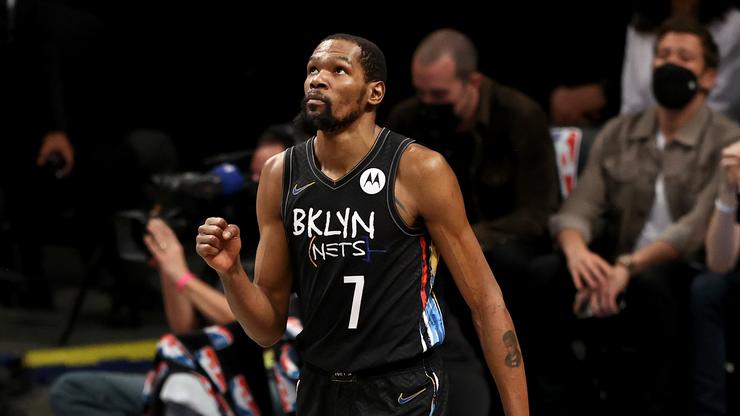 Kevin Durant led the Brooklyn Nets to a resounding win and a 3-2 series lead against the Milwaukee Bucks on Tuesday, and he made NBA playoff history in the process.

Halfway through June, the NBA playoffs are heating up more and more every day. The Phoenix Suns have solidified their spot in the Western Conference Finals, but the remaining six teams — the Los Angeles Clippers, Utah Jazz, Atlanta Hawks, Philadephia 76ers, Milwaukee Bucks, and Brooklyn Nets — are still powering through some extremely competitive series. On Tuesday night, however, Kevin Durant delivered such an incredible playoff performance that it has convinced many NBA fans that he and his Brooklyn Nets are definitely headed to the Eastern Conference Finals, with or without the help of Kyrie Irving and James Harden.

Prior to Game 5 in Brooklyn, the Nets and the Bucks’ series was tied at 2-2, and with the Bucks leading the game by 16 points at halftime, it looked like Milwaukee was going to be able to steal an away game and finally take the series lead. But then Kevin Durant gave the Barclays Center and every NBA fan across the world a show for the ages, with a historic performance that pushed his team to a hard-fought and much-needed victory.

According to CNN, Kevin Durant scored 49 points, snatched 17 boards, and facilitated 10 assists, making KD the first player in NBA history to record at least 45 points, 15 rebounds, and 10 assists in a playoff game. What made Durant’s performance even more impressive is that the 32-year-old star power forward played throughout all 48 minutes of the game, which CNN reports is the first time an NBA player has done that since LeBron James did it in 2018 while playing with the Clevland Cavaliers.

Kevin Durant and the Brooklyn Nets are currently up 3-2 in their 7 game series against the Milwaukee Bucks. Their Eastern Conference semifinals matchup continues in Milwaukee on Thursday, so while you patiently wait for the next game, check out some of the best Twitter reactions to KD’s mind-blowing performance below.