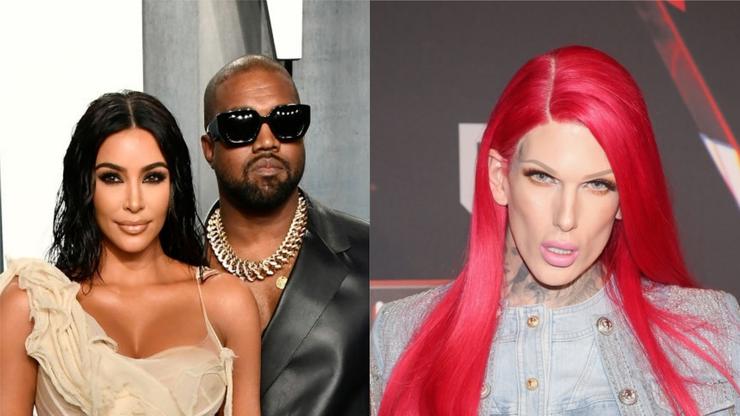 A source close to Kanye and Kim told E! News that the Jeffree Star rumors are “absolutely not true.”

Jeffree Star seems to have no issue with his name being thrown around in all sorts of rumors, enjoying the clout from his newfound attachment to Kanye West on Twitter, telling his followers that he was “ready for Sunday Service” and running along with the joke that Kanye had allegedly been sleeping with him. According to “sources” close to KimYe though, as though we even needed confirmation of this, the rumors are totally false and should not be believed.

A source that’s apparently close with Kanye West and Kim Kardashian told E! News that “there is absolutely no truth to Jeffree and Kanye rumors”.

Jeffree Star previously fanned the flames by posting his “Sunday Service” picture, also joking that 2021 was already getting too intense for his liking.

The rumors that Jeffree and Kanye were having sex originally came from TikToker Ava Louise, who previously gained attention by licking toilet bowls and starting a challenge during the coronavirus pandemic. She claimed to have inside information on the matter, strongly suggesting that Kanye had been intimate with a male beauty guru, which many believed was Star.

i can’t say WHO cuz he’ll sue me hint hint but it’s part of the reason Kanye’s so religious now it’s his self hatred …. my source is legit I promiss

Additionally, Kim Kardashian has been wrapped up in rumors surrounding Van Jones, who many on Twitter hope she starts dating once her reported divorce with Kanye is finalized. First, they’ll need to actually sign papers though.

As of now, Kanye and Kim are supposedly working on their marriage through counseling. TMZ reports that divorce is still on the table, but it may not be as imminent as everyone believes. The couple actually spent the holidays together, exchanging millions of dollars worth of gifts. That doesn’t sound like something that a husband-and-wife duo would do if they were seriously on the rocks.