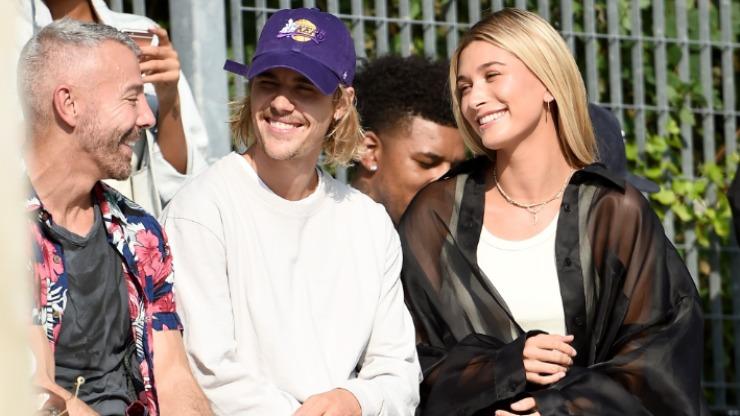 On Calvin Klein’s 50th anniversary, the brand launched a #CK50 campaign with some the hottest celebrities today. Among these celebrities were Justin and Hailey Bieber, who just got married… again. The couple got secretly married at a New York City courthouse, then retied the knot with some family and celebrity friends in Los Angeles, California. A couple days ago, the Biebers re-pressed their love for each other at wedding in Bluffton, South California.

Hailey stated that marriage will not be easy, especially marrying young. ”We’re going to change a lot, but we’re committed to growing together and supporting each other in those changes,” she declared. This CK campaign was truly reflective their relationship, as they were looking extremely cozy, all wrapped up in each other — really feeling the heat.

These two can’t seem to get enough each other. They posed in their matching Calvin Klein underwear set, truly emitting some relationship goals. Hailey also posed by herself in her Calvins, while portraying her seductive physique and tattoo, as well as her independent spirit.

Like these pictures weren’t sexy enough, the brand decided to launch a campaign photographed by Glen Luchford. This campaign starred the Biebers, alongside A$AP Rocky, Kendall Jenner, Liu Wen, Rebecca Leigh Longendyke, Troye Sivan, and Parker Van Noord. The Biebers got really comfortable, and even shared a steamy kiss on camera, while rocking to EMF’s mega ’90s hit “Unbelievable.” Although the Biebers were the highlight the campaign, we can’t deny A$AP Rocky‘s sexy vibes, which gave the ad that extra flare.

In a statement, the brand declared that ”the campaign captures the rebellious spirit that has shaped the brand over the last 50 years.” Here’s a clip the video, portraying the ”unfiltered self-expression and provocation.” Did these celebs deliver? Let us know what you think.