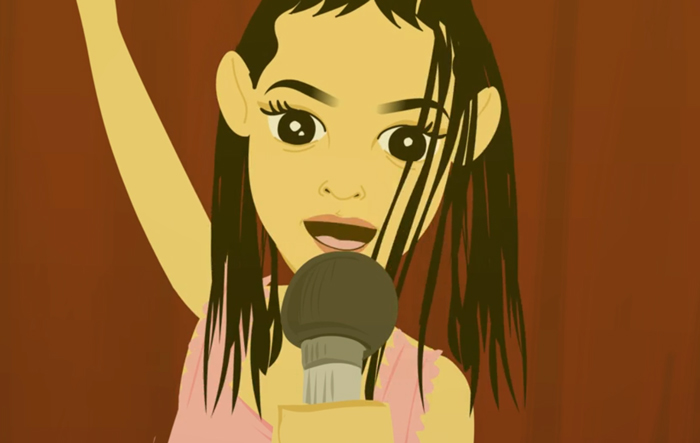 To celebrate, the birthday girl takes center stage in JAY-Z’s animated video for “Blue’s Freestyle,” which arrives on his daughter’s 6th birthday.

The playful visual, directed and animated by Maurice Taylor, takes place at a talent show in Taylor Hall, where Blue is dressed in pink for her ballet recital. That changes, however, when the record scratches to a halt and her bars start droppin’. “Never seen a ceiling in my whole life,” she raps. “Boom shakalaka, boom shakalaka!”

Seated in the auditorium, the cartoon Carters are momentarily shocked, until they realize that Blue is goin’ f with her MC skills. That’s when they smile and bop their heads with pride and joy for their oldest daughter.

Back on stage, Blue shows f her flow and ballet skills, all in one. The six-year-old even caps f the performance with a mic drop, while Blue’s siblings, Sir and Rumi, also make a cameo from their crib.

“Blue’s Freestyle” was combined with “We Family” on the deluxe edition Hov’s critically-acclaimed album, 4:44. The project earned Shawn Carter a whopping eight nominations at this year’s Grammys, set to take place Jan. 28.