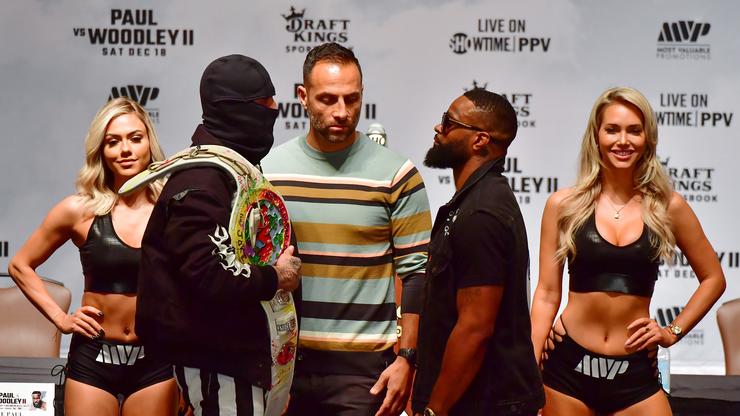 Jake Paul did most of the talking as the he went face-to-face with Tyron Woodley.

Jake Paul and Tyron Woodley will be going up against each other tomorrow in what should be a very interesting fight. Originally, Paul was going to take on Tommy Fury, but that fell through as the British boxer was suffering from a chest infection and a broken rib. This ultimately led to Paul asking Woodley if he wanted that rematch he promised him. In the end, Woodley accepted, and now here we are.

This is set to be a good matchup as the two actually fought pretty close last time around. Woodley actually got some good punches in and Paul wasn’t as dominant as he was against Nate Robinson and Ben Askren. With that in mind, fans are eager to see if Woodley can finish Paul off this time.

Today, the two participated in a pre-fight press conference where they also got to partake in a customary staredown. In the clip below via DJ Akademiks, Paul did a lot of the talking throughout the staredown as he continued to try and offer up some intimidating fighting words. Woodley did not seemed phased by the whole thing, however, Jake continued to talk and at one point, he even got fired up as he beat his chest. Needless to say, he and Woodley are ready to go to war.

The fight goes down tomorrow, Saturday, December 18th in Tampa Bay, Florida and it promises to be pretty entertaining, even if you’re not a fan of Paul’s foray into boxing. Let us know who you think will win, in the comments section below.