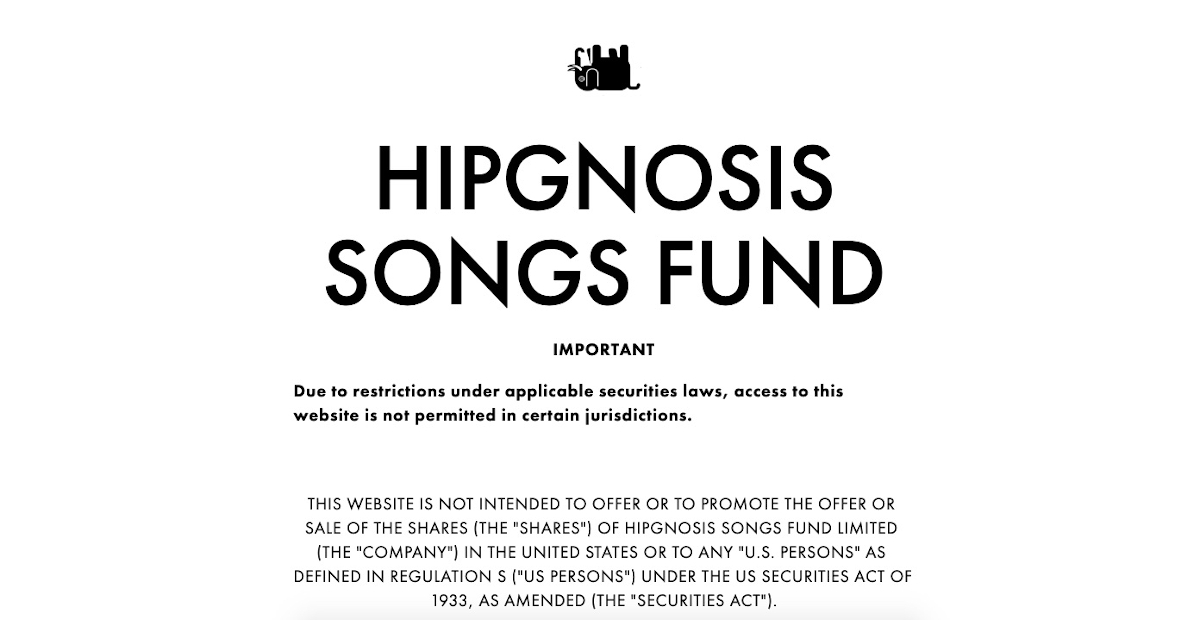 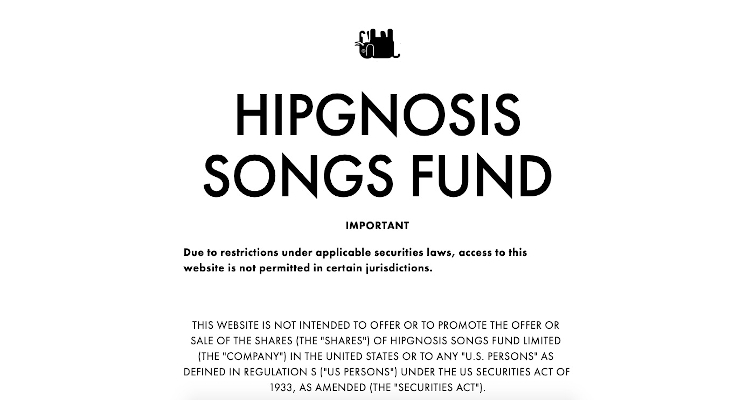 The message displayed on the main page of Hipgnosis’ website, for those accessing from the U.S.

UK-based song-investment fund Hipgnosis has been blocked from soliciting investors in the United States, Canada, Australia, Japan, and South Africa, a new message on the website reveals.

Upon navigating to Hipgnosis’ website, U.S.-based users (and presumably those who reside in any of the other listed countries) are greeted with an “important” notice indicating: “Due to restrictions under applicable securities laws, access to this website is not permitted in certain jurisdictions.”

Next, the approximately 550-word-long text notes in all caps that the “website is not intended to offer or to promote the offer or the sale of the shares” of Hipgnosis “in the United States or to any ‘U.S. persons’ as defined” under the Securities Act of 1933. Switching to sentence case and shifting its focus to residents of four other nations as well as “any jurisdiction in which such an offer or solicitation would be unlawful,” the message then states that Hipgnosis “has not been and will not be registered under the US Investment Company Act of 1940.”

According to the Securities and Exchange Commission (SEC) website, the Investment Act of 1940 “regulates the organization of companies, including mutual funds, that engage primarily in investing, reinvesting, and trading in securities.” Moreover, “the regulation is designed to minimize conflicts of interest that arise in these complex operations.”

From there, Hipgnosis’ homepage emphasizes that the song-investment fund’s shares aren’t registered under the Securities Act, “and may not be offered, sold, resold, pledged, delivered, assigned or otherwise transferred, directly or indirectly, into or within the United States or to, or [sic] for the account or benefit of, any US Persons” unless they receive an exemption from or are not bound by the Securities Act.

Lastly, the message relays that “there has been and will be no public offering of the Shares in the United States.” Visitors must then confirm (by clicking “accept”) that they aren’t accessing the website from any of the above-mentioned countries and won’t send the contained information to residents of the U.S. “or to any publications with a general circulation in the United States.”

“If you cannot so represent, warrant, undertake and agree, you must click the button labelled ‘Decline’ or otherwise exit this website,” the message states towards its conclusion. Selecting “decline” takes one to a “No Access” page, complete with a single line of text specifying: “You are not eligible to access the information included in this website.”

It’s unclear what exactly prompted the three-year-old Hipgnosis, which is traded as SONG on the London Stock Exchange, to bar stateside residents from entering its website. A Hipgnosis rep first told Digital Music News that she was looking into the matter, but said (at about 10 PM GMT today, January 8th) that “it may be on Monday” that the London-based Hipgnosis responds.

Shortly thereafter, however, at about 11 PM GMT (3 PM PST), the rep wrote in an email: “Investors in each of the countries you listed can purchase shares in Hipgnosis just as they would any other public company.” No explanation was offered for the website’s message or the fact that access is blocked for residents of certain countries, and the rep didn’t respond to a follow-up inquiry in time for publishing.

Separately, the move raises interesting questions about the catalog- and capital-hungry company’s ability to broaden its investor group in the coming months and years. More immediately, though, Hipgnosis this week scored a $271.26 million (£200 million) credit tranche for further song-rights investments.