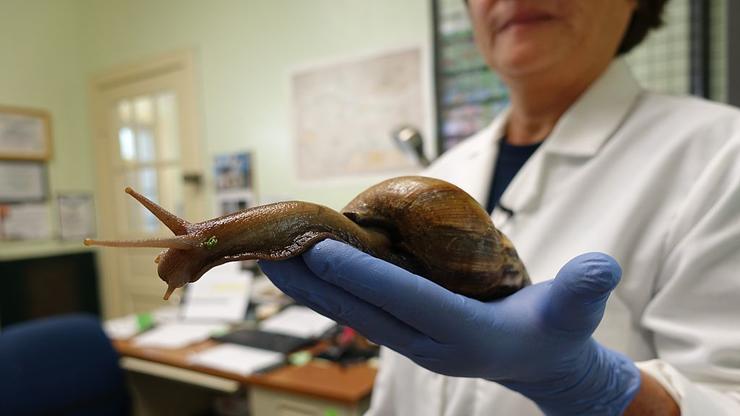 The African pests can grow to be eight inches long and have the ability to spread meningitis.

Just when everyone thought quarantining was a thing of the past, a new mishap has caused some Floridians to lock things down again. According to the Florida Department of Agriculture and Consumer Services, giant African land snails were located in Pasco County, FL on June 23.

As reported on the FDACS website, the slimy creatures are a risk to humans because they carry the parasite rat lungworm, an organism that can give people meningitis. Not only can it affect one’s health, but they grow at an incredibly fast rate, producing nearly 2,500 eggs per year making their population difficult to keep under control.

Christina Chitty, a public information director at FDACS, has a theory as to what might have caused the snails to invade the county– illegal pet trading. While owning these animals is against the law, according to her, some people have the exotic pests anyway. She explained that losing the snail, or throwing it into the wild, is what could have caused the outbreak.

On June 25, the county’s quarantine went into effect, and, according to the department, they plan to spend three years getting all of the African native snails out of the town. They’ll do this by using metaldehyde, a pesticide that is believed to treat soil.

While residents aren’t forced to stay inside their homes as they did during COVID, there are other rules that they must abide by. They are prohibited from moving things like plants, yard waste, and soil, outside of designated zones, as the snails can latch on to more than 500 different types of herbs.