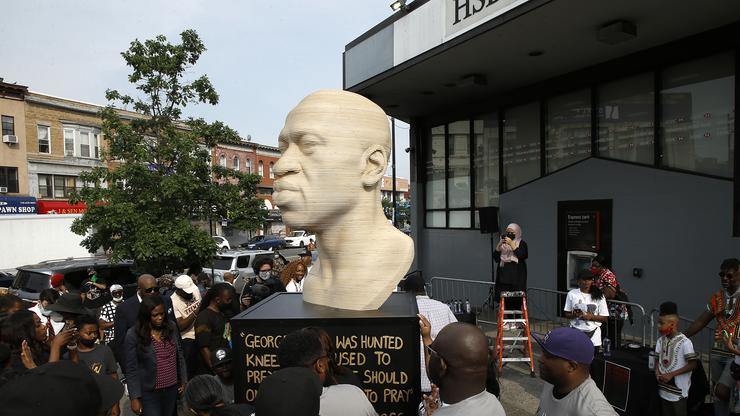 George Floyd’s death posthumously sparked a moment of racial reckoning across the world, after he was killed by a Minneapolis police officer last year.

In June, a George Floyd statue that has been on display for an exhibition by Confront Art as an act of solidarity against racial injustice — was smeared with black paint and marked with an alleged logo of a white supremacist group, five days after it was first unveiled in Flatbush Avenue, in Brooklyn.

The same statue, now located in another borough of New York, is receiving similar mistreatment. The Floyd statue, which is now located in New York City’s Union Square Park was vandalized again, this time just 48 hours after it was unveiled.

In the incident captured on video surveillance (watch below), the suspect is depicted as a white male, with a medium build, who wore a green jacket, neon t-shirt, and black skull-cap hat, while wielding a skateboard.

The perpetrator was captured wandering around the John Lewis statue before splattering grey paint on the face of the Floyd statue around 10 am, police said.

Moving forward, police and community volunteers are working together on a joint front to rectify the situation. The New York Police Department ‘Hate Crimes Task Force’ is launching a full investigation of the incident. Meanwhile, community volunteers have already begun scraping paint off the statue.

Brooklyn Borough President Eric Adams expressed his frustration related to the act of vandalism in a tweet.

“The trauma of his tragic death should not be compounded by the trauma of seeing his memorial defaced,” he said.