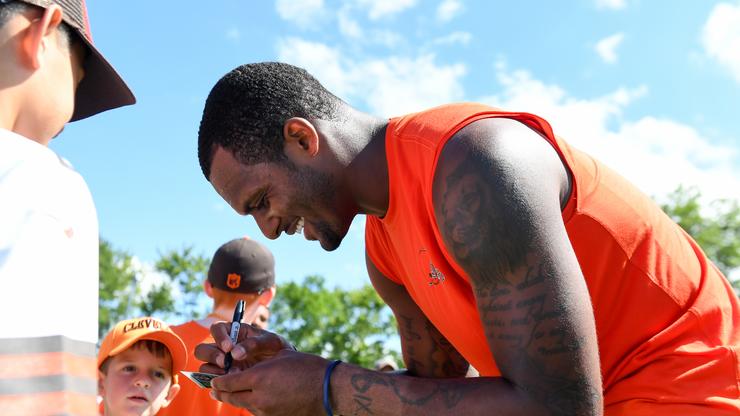 Deshaun Watson is a controversial figure right now. After being accused of sexual assault by over 20 women, Watson came out and denied all of the allegations. Having said that, he has settled the vast majority of the lawsuits that were brought his way, and today, he was officially suspended for six games by the NFL.

This is a decision that has created quite the stir amongst fans and media members. This is mostly because it is quite comical for someone to be suspended six games after being hit with nearly 30 sexual assault accusations. Not to mention, Falcons wide receiver Calvin Ridley was suspended for a full season after betting on NFL games, which is a much lighter offense in every way possible.

In the Twitter reactions down below, you can see just how frustrated fans and media members were with this decision. Ridley was on the top of everyone’s minds, and when you see the comparisons between him and Watson, you will immediately understand why the outrage is so palpable right now.

“Calvin Ridley got a whole year for betting 1,500 on a Fanduel parlay in a game he didn’t play in but deshaun watson getting 4-8 games for 30 SA allegations,” one fan wrote. Meanwhile, reporter Dov Kleiman made an interesting observation, saying “Calvin Ridley made a bet that his team will win a game in the NFL. He got suspended indefinitely, through at least the entire 2022 season and possibly more. He also lost $11.1 million in salary. Deshaun Watson meanwhile received 6 game suspension, he’ll only lose less than $1M.”

Let us know what you think of the Watson suspension, in the comments section down below.