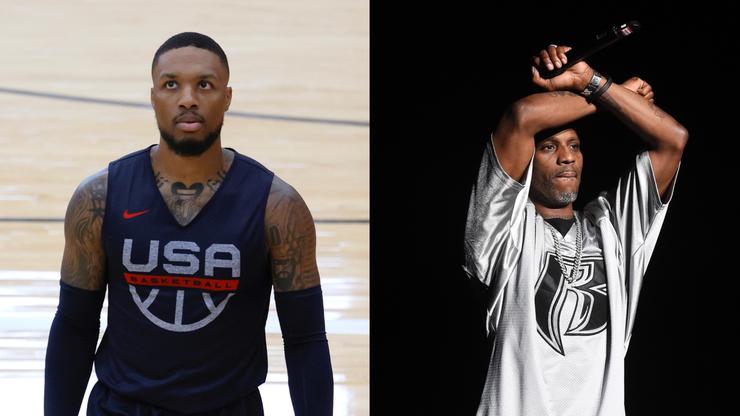 Dame D.O.L.L.A. reveals he had a track in the works with the late Yonkers legend.

Despite not even being a free agent this offseason, Damian Lillard continues to be one of the most-watched players in the NBA, as many basketball fans are still all but certain that he will soon be demanding a trade from his longtime team, the Portland Trailblazers. While a trade has yet to occur between Portland and another NBA team, Lillard has still been having an awe-inspiring summer.

Shortly after winning his first Olympic gold medal in Tokyo earlier this month, Damian Lillard — who raps under the moniker Dame D.O.L.L.A. — released his latest full-length LP, a star-studded effort titled Different On Levels the Lord Allowed. With features from Lil Wayne, Snoop Dogg, Q-Tip, Raphael Saadiq, and Mozzy, Dame definitely put his best foot forward with his new album, and during an interview with Complex, he reveals that he has an unreleased record with DMX for several years.

According to HipHopDX, Damian Lillard was working with the late Hip-Hop icon in 2017 for a track on Dame’s second studio album Confirmed, but unfortunately missed deadlines ultimately resulted in the track getting shelved.

“I actually had a song with DMX,” the All-Star point guard casually reveals during his interview with Complex. “We were already moving. What happened was, I had a song, it was gonna be on my second album. Because we were talking about it in the studio like, ‘Who we wanna get on it? We gotta get DMX.’ It was me and my boy Drake, we were both big DMX fans as kids. So we got hold of somebody that was tied to him and I was on the phone with him. And I was like, ‘Man, let’s do this song. I got an idea.’ I had some ideas and I wrote the song, I sent it to him, he sent it back.”

“We gotta find it, ’cause it was more like adlibs. He sent the track back with a bunch of adlibs and him like growling… he was doing him,” Dame continues. “So everything he sent back was on the track, but he couldn’t meet the deadline and it didn’t turn into what we wanted it to turn into so we just kinda left it. But it was already like, it was there.”

Following DMX’s tragic passing earlier this year, Damian Lillard was one of the many voices in sports and music to come forward with kind words about the late artist. Taking to Twitter, the Portland Trailblazers star paid tribute to DMX by mentioning his qualities as an artist and human being, and considering Lillard’s latest interview, that tweet holds even more weight four months later.

“Real DMX fan… Loved that dude as an artist and person equally,” Dame tweeted on April 9. “Happy I had the pleasure of interacting with him over music.”

You can check out Damian Lillard’s full interview with Complex below, and if you’re especially interested in his story about DMX, talk of the late Yonkers legend begins around the 19:15-mark.