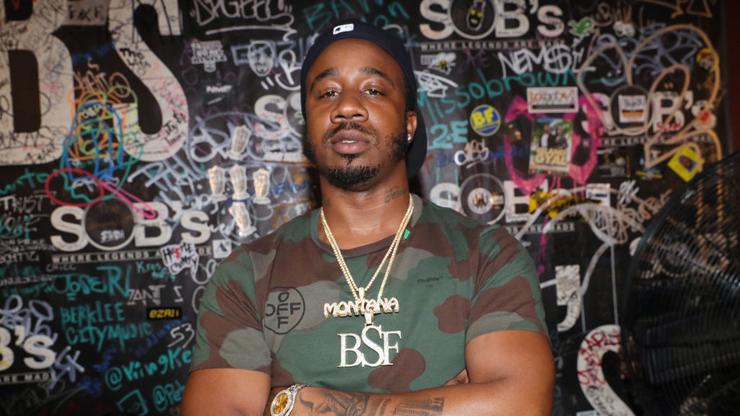 Benny The Butcher sits down with Adam 22’s No Jumper Podcast, speaking on his long-awaited Drake collab, Griselda’s presence on “Donda,” and more.

Benny The Butcher is on a triumphant run, continuously delivering excellence while his Black Soprano Family roster steadily rises. Now, the Griselda lyricist and his BSF right-hand man Rick Hyde have hit the No Jumper podcast for an insightful interview, speaking on topics like Drake, JAY-Z, and Griselda’s presence on Kanye West‘s Donda.

“I’m not on the Donda album,” confirms Benny. “I was on Live the other day saying ‘I’m not on Donda.’ I don’t think Ye wanted me on Donda. That’s cool. Conway and West on there, if they’re on there everybody knows that I’m on there, cause that’s the gang. I’ma still fly that flag. Do it look like I’m left off Bad And Boujee type shit. If the homies on there, I’m on there. It’s the same flag.”

Adam jokes that Benny might be a little bit too OVO-related for Kanye to fully endorse, prompting Benny to speculate on whether or not the ongoing rift between Ye and Drake may have impacted his bag. “I don’t think so, I think those dudes are mature,” he states. “They know that it’s a business and guys who they fuck with are going to work with guys they don’t fuck with. They understand that. I don’t take none of this shit personal.”

Without wasting time, Adam inquires if we’re ever going to hear the long-awaited Drake feature. “Yes we are,” says Benny. “He hit me the other day and said ‘let’s drop it as a freestyle’. I know he’s doing shit and working on his album. Same thing with me. He’s just trying to pick the right spot cause it’s something he and I want to do. It’s about picking the right spot.”

“We obliterated it,” teases Benny, after Adam wonders whether or not the pair have simply fallen out of love with the song. “We’re just trying to pick the right spot. “He has been sitting down for a while. He wants to put an album out. He just trying to pick a spot.” Adam agrees that releasing new music before the big album release might shatter immersion, referring to the pre-Drake-release as “the calm before the storm.”

Shortly afterward, Benny speaks on his relationship with JAY-Z, who he refers to as a mentor. “He just trying to steer me in the right direction,” explains Benny. “He accepts the responsibility of showing our generation how to do it. A lot of dudes don’t, they are too busy being competitive with us.” He explains that JAY-Z and the entire team at Roc Nation continue to show interest in his career, prompting Adam to ask how Hov feels about the Drake feature.

“He’s excited about it because it will put me in a better position,” says Benny. “He’s one of the first people I played it for. It’s JAY, he don’t take that [rivalry] personally. He gon’ be him. None of these n***as can hold a candle to that guy.”

For more from Benny, check out the full interview below, courtesy of No Jumper.