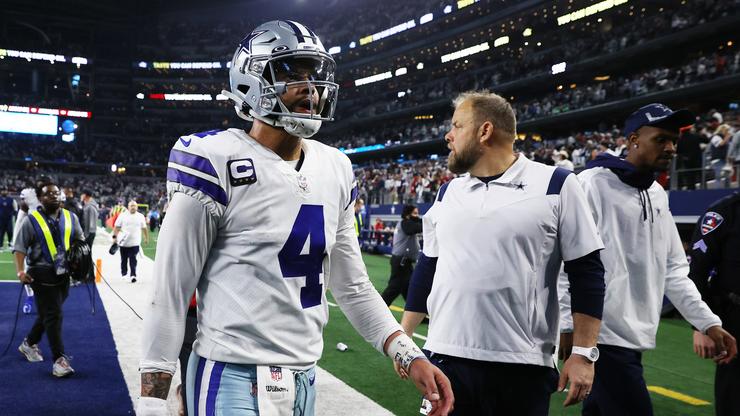 Dak Prescott and the Dallas Cowboys lost another playoff game on Sunday as they fell to the San Francisco 49ers by a score of 23-17. It was the only upset of the entire weekend, however, given the Cowboys’ recent history, the loss was hardly surprising. “America’s Team” was able to keep things close towards the end, and they were even able to get in striking distance with just a few seconds left, however, the officiating crew could not set the ball down on time, which ultimately forced the Cowboys to miss out on one final play.

Immediately after the game, Cowboys players were pelted with debris from the crowd. The referees were also hit with some objects, and it was quite the stain on what was an otherwise clean game. As you can see below, the anger of the Dallas crowd was on full display.

Prescott was asked about the crowd’s behavior, and at first, he was pretty appalled by it. However, when a reporter claimed that the debris was meant for the officiating crew, Prescott changed his tone, blaming the refs for how the game played out. He then gave a light co-sign to the fanbase’s actions, saying “credit to them.”

“The fans felt the same way as us,” Prescott said. “I guess that’s why the refs took off and got out of there so fast. I think everybody is upset with the way this thing played out.”

Now, the 49ers will play the Green Bay Packers next Saturday, while Prescott and his teammates will start their vacation early. For many Cowboys haters, this was the best-case scenario.