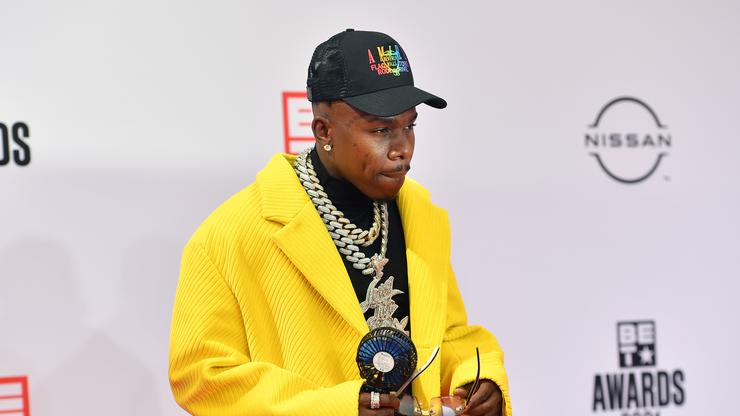 DaBaby still took a picture with the fan after declining the hug.

DaBaby has been under fire recently for the way in which he interacted with a couple of young boys selling candy in a now-viral video. In the clip, the two boys are seen trying to upsell boxes of Skittles and Gushers for $200 each, and as a way of teaching them a lesson on hustling, DaBaby opted to just buy one pack of candy from each of them for $2 each.

Many fans have turned on DaBaby following the viral incident for his lack of compassion, and a newly surfaced video of him interacting with another fan isn’t any more likely to sway the way that disgruntled fans already view the BLAME IT ON BABY rapper.

In the new video posted by Our Generation Music, fans are seen huddled around DaBaby and his security, and as one eager fan approaches him, he smiles at the “Masterpiece” rapper and extends his arm out for a hug. DaBaby is seen not looking particularly excited about the situation, and he quickly shuts down the hug while mumbling something to the fan.

DaBaby’s security detail lightly taps down the fan’s arm, and the two men proceed to pose for a picture and go their separate ways cordially. Some fans in the comments have pointed out that DaBaby’s actions are on-brand because he doesn’t typically let fans touch him, but others aren’t as convinced, with many criticizing the “Red Light Green Light” artist for not reciprocating the love that his supporters have shown him.

Peep the video below, and let us know if you think DaBaby was right or wrong to turn down a hug from one of his fans.

A post shared by Our Generation Music ð° (@ourgenerationmusic)