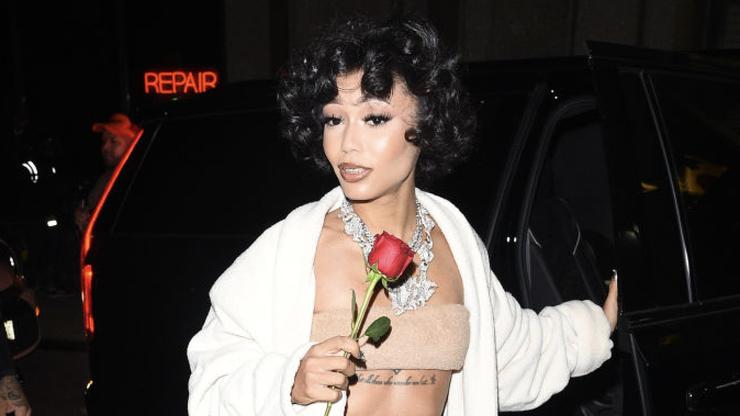 Coi Leray had her booty shaking for fans in Vegas.

Coi Leray’s performances have been known to include plenty of carefully curated dance routines, and the 25-year-old’s most recent show in Las Vegas was no different, although her moves this time around were of a much more sensual nature. At one point during her set, the Boston native called a lucky male fan onto the stage to receive a lap dance from her, although he, unfortunately, couldn’t keep his hands to himself.

In a video that’s surfaced on social media, Leray can be seen giving it her all in a pair of teensy denim shorts and a white cropped tank. The man receiving a lap dance dressed in all black, his shirt riding up his torso amid the performer’s antics.

Just a few days ago, the “Blick Blick” hitmaker made it known that she’s an “alpha female” due to her “dominant” mother, and we see that energy come through in the video as she pushes her fan down on the chair for a treat.

Things appeared to be going smoothly at first, with the fan clearly enjoying the view (and the ride), but when he felt comfortable enough to rub his hand across Leray’s behind, she didn’t take so kindly, telling him to “get the f*ck outta here” before recruiting another audience member to replace him.

Funnily enough, the second man also caused a stir for having a hole in the crotch of his pants, although he managed to keep his hands to himself as the Trendsetter did her thing – check out Twitter’s reaction to the viral moment below, and let us know if you think Leray was in the right or wrong for kicking her fan offstage in Vegas in the comments.