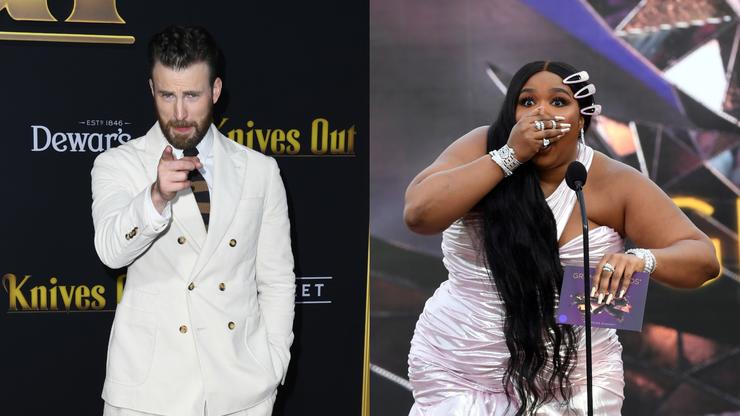 The former “Captain America” actor is apparently cool with it, as long as there isn’t a gender reveal party.

Lizzo is currently gearing up to release “Rumors,” her first new single in two years, but she recently joked on TikTok about having much more serious things to worry about. A fan recently commented under one of her recent videos, “lizzo baby… we know your [pregnant] and we know its Chris Evans now spill the tea.”

Lizzo playfully went on with the comment by posting a video in response in which she “aired out the rumor” about her and the Knives Out actor. Instead of denying it, however, Lizzo played a song from the Captain America: The First Avenger soundtrack in the background of her video and said, “This is something that I’ve really been trying to keep personal and private just between me and the father of my child, but since we’re airing out all the rumors today…I’ve been sucking in. We’re gonna have a little America!”

Both Chris Evans and Lizzo have a history of hopping into each other’s DMs, so once Chris Evans caught wind of Lizzo jokingly claiming that he’s her baby father, he immediately reached out to her once again.

“Hi! Just heard about our little bundle of joy my mother will be so happy lol,” Chris Evans writes in Lizzo’s DMs before doubling back with a quick disclaimer. “(Just promise me no gender reveal parties lol).”

Upon receiving the former Captain America star‘s message, Lizzo decided to share it by turning it into a lighthearted TikTok in which she “confirmed” the identity of her baby’s father. “OMG YALL— HE SAW THE BABY BUMP! WE DID IT!” the Cuz I Love You artist wrote in the video’s caption. “NOW YALL GOTTA NAME LIL MERICA!!!!! WHAT YALL BOUTA NAME MY BABY ?!”

OMG YALL— HE SAW THE BABY BUMP! WE DID IT! NOW YALL GOTTA NAME LIL MERICA!!!!! WHAT YALL BOUTA NAME MY BABY ?! ð¤°ð¾ðºð¸

The audio that was playing in the background sounds like a clip from Lizzo’s forthcoming single “Rumors.” The highly anticipated single drops next week on August 13, so stay tuned to see if there are any more antics from Lizzo and Chris Evans leading up to its release.