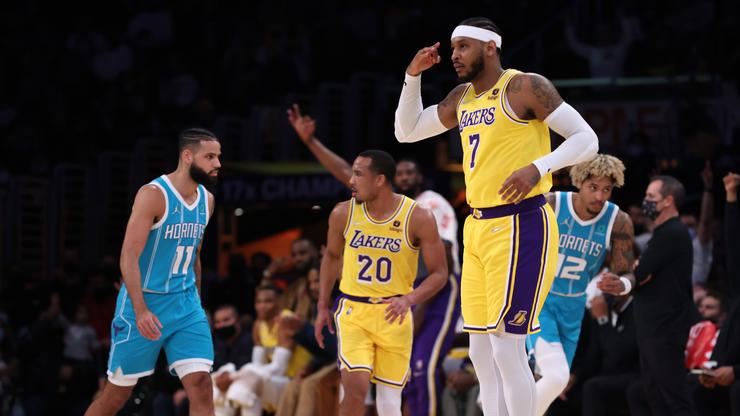 The Lakers have had a rough start to their 2021-22 championship campaign. After forming an Avengers-style super team with the likes of LeBron James, Anthony Davis, Russell Westbrook, Dwight Howard, Carmelo and a litany of notable role players, the Lakers have dealt with chemistry, injury and performance issues.

Going into last night’s game in Staples Center against the Charlotte Hornets, the Lakers had a 5-5 record, and had been playing the last few games without LeBron due to an abdomen injury. Somebody had to rise to the occasion, and Carmelo did just that.

The Lakers led by double digits in the fourth quarter, despite Westbrook’s poor performance. Melo was launching threes at an efficient rate, utilizing his catch-and-shoot quick trigger and trademark jab steps. LeBron, clad in street clothes, was loving what he saw from the Lakers bench.

Soon though, the Hornets would storm back behind an effective attack from young stars Miles Bridges and LaMelo Ball, seeing Bridges hit a game-tying three with 23 seconds left to send the game to overtime.

In a tight overtime, Carmelo’s clutch three with two minutes left gave the Lakers a one point lead that they held until the end of the game for a victory.

Melo finished with 29 points on 9-13 from the field (69%) and 7-10 from three (70%). His efficiency and timely shots have been critical in keeping the Lakers afloat so far this season, as he is second in the league in bench points and bench threes this season.

Over the past six games, in which the Lakers are 4-2, Anthony’s averages are 20.7 PPG, 55% FG, 58% 3P in only 29 minutes per game, truly cementing the resurgence not many have expected from him after his stints with the Thunder and Rockets.

Players and voices from around the league praised Melo postgame for his resilience and ability to adapt to his new role.

How important do you think Melo will be for the Lakers moving forward?