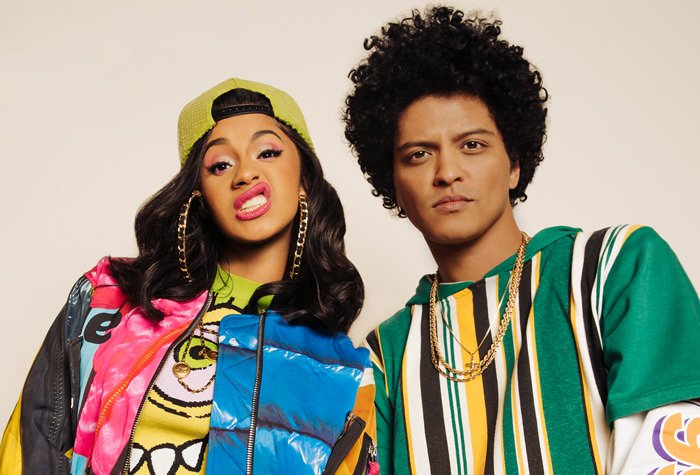 The Hot 100 is drippin’ with “Finesse,” thanks to Bruno Mars and Cardi B’s ’90s-inspired remix, which jolts from No. 35 to No. 3 on the Billboard in its first full week tracking.

“Finesse” might stand behind Ed Sheeran and Beyoncé’s “Perfect” (No. 1) and Camila Cabello and Young Thug’s “Havana” (No. 2) on the Hot 100, but it’s already reached the top the Streaming Songs chart with 38.3 million U.S. streams. It’s Mars’ second in that role after Mark Ronson’s “Uptown Funk!” and Bardi’s second after “Bodak Yellow (Money Moves).”

The song, which also climbed to No. 1 on the Hot R&B/Hip-Hop Songs chart and the Hot R&B Songs chart, is a major hit for both artists. It marks Mars’ 15th Hot 100 top 10 and Cardi’s fourth. It also gives Bruno the distinction having three Hot 100 top 10s on each his first three albums, a feat previously only reached by Whitney Houston, Mariah Carey, Beyoncé, Lady Gaga, and Lionel Richie.

“I can’t believe I.T!!!!!!!im sooo happy !!!!!” said an ecstatic Cardi. “WOW thank @brunomars .NUMBER FUCKIN #3 ..I mean the impact was braaazzyyyy .I want to thank EVERYBODY who repost FINESSE ,made dancing videos .This means sooo much to me !!! Sooo many fuck shit been happening and I’m just happy that work PREVAIL!!!”

Justin Timberlake puts his “Filthy” hands all over the Hot 100 this week. The lead Timbaland and Danja-produded single f his forthcoming album Man the Woods enters at No. 9, becoming his 18th solo Hot 100 top 10 following six as a member *NSYNC.