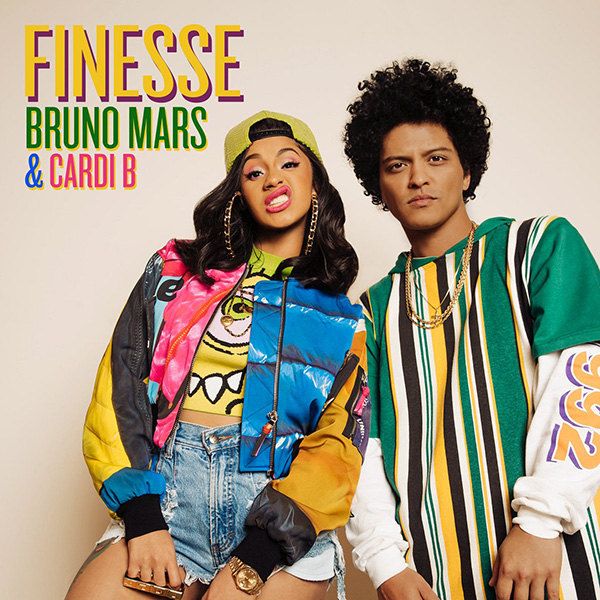 The remix to Mars’ 24K Magic single featuring the “Bodak Yellow” rapper is set to debut at midnight tonight. “Start your 2018 with Big Bronx Boogie Herself @iamcardib and I Midnight Tonight EST #Finesse,” tweeted Mars, who also revealed the cover art.

The photo shows Mars and Bacardi dressed in colorful throwback threads with nods to the 1990s. Stylistically, this fits the theme the original 24K Magic track, which boasts ’90s influences, including some hints Bell Biv DeVoe’s “Poison.”

Last month, a sound manager assistant who reportedly worked on the video, leaked information about the collaboration. “My star struck ass helped the sound manager record a video for Bruno Mars and Cardi, allll night,” wrote the assistant. “They literally record for 12+ hours just to get 4 minutes video time!! But they work sooo hard like it’s literally their JOB!”

Bruno and Bardi have shown love to one another since August, when Mars said he was listening to Cardi’s music. “This is sooo crazy,” she replied. “Can’t believe he even knows me. @brunomars sooo Dope !!!!!”

“Finesse” could amplify Cardi’s current chart takeover. Recently, she tied a Billboard Hot 100 milestone that only The Beatles and Ashanti have accomplished in the past, by having her first three entries simultaneously in the top 10.

“I’m very happy, like very motherfucking happy,” she said in a celebratory video. “I got three songs on the top 10. You know how that make a bitch feel? … I know we all God’s children, but I think he love me the most. But y’all special too.”