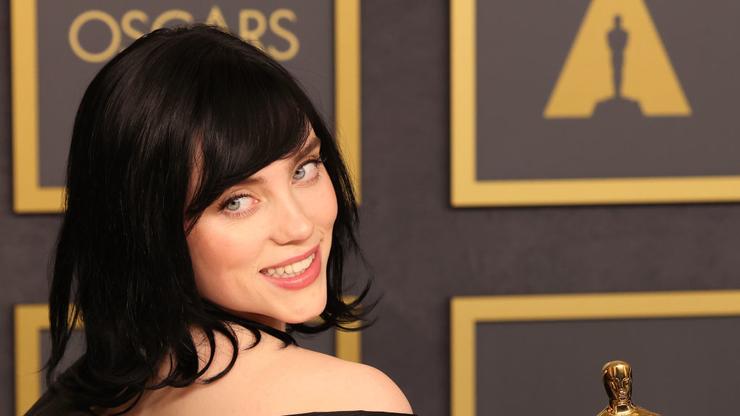 Billie’s “The Simpsons” stint follows The Weeknd voicing Orion Hughes in a recent episode of the hit animated series.

Billie Eilish has entered The Simpsons universe. Today (April 22nd) the hit animated series debuted a brand new short film starring the “Happier Than Ever” singer as herself, rocking her old (and formerly signature) jet black hair with bright green roots, as well as a collection of silver rings around her fingers.

As per Uproxx, the three-minute-long video begins with Eilish just so happening to overhear Lisa playing her saxophone (as she so often does) under an overpass. “Can John Coltrane really be playing under a freeway overpass?” the Grammy Award-winning singer asks herself.

“No, he’s dead,” she concludes before hanging herself upside down in hopes of figuring out who could possibly be playing the catchy tune.

After introducing herself to Lisa while dangling from the overpass, the young girl begins uncontrollably weeping – as any adolescent coming unexpectedly face-to-face with one of their idols presumably would.

“We, too, would profusely sob at the chance to jam with @BillieEilish,” the official Disney+ Twitter account wrote early this morning. “@TheSimpsons: When Billie Met Lisa is now streaming only on #DisneyPlus!”

It’s worth noting that Eilish isn’t a total stranger to the world of television – she hosted an episode of Saturday Night Live in late 2021, and since then, she’s admitted that it was anything but a cakewalk.

“The week of preparing for SNL is f*cking nuts, dude,” the 20-year-old revealed. “It’s literally alien. I cried every single day of the week, no joke at all.”

In other The Simpsons news, The Weeknd was also tapped to voice a character – child influencer Orion Hughes – in a recent episode; read more about here, and let us know if you’ll be watching Billie Eilish’s new animated short on Disney+ in the comment section below.