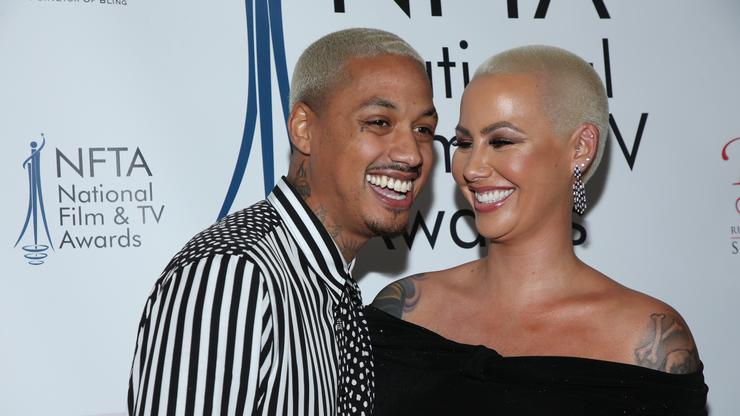 The two were spotted together in public following AE’s apology for cheating.

Alexander Edwards seems to be hell-bent on winning Amber Rose back. The music executive recently broke the silence on Rose’s accusatory claims of him cheating on her with twelve different women, and issued an emotional apology on social media, begging for her forgiveness.

The two have since been spotted together on a family outing, looking cozy with Amber holding their son Slash in one hand, and AE carrying a large stuffed dinosaur and other gifts.

The two may simply be supporting each other in an effort to co-parent their son, but speculation arose with Edwards’ claims that he’s willing to put in the work to get their family back together.

“I want to sincerely apologize to my beautiful wife @amberrose you didn’t deserve what I did to you,” AE wrote in his apology post to Rose. “You’re an amazing person and a wonderful mother to our boys. I’m sorry for the pain that I’ve caused you, my son Slash and my stepson Sebastian. All I want is my family back and I’m willing to do anything to make things right. Please forgive me.”

The outing comes just one day after Amber’s night spent at “Verzuz” with Wiz Khalifa, her other baby daddy to their eight-year-old son, Sebastian. The two have publicly shared a healthy co-parenting relationship, and the Verzuz sighting caused fans to speculate a reconciliation between the two, despite Wiz allegedly being in a relationship currently.

Rose took to social media to openly detail AE’s infidelity back in August, accusing him of “gaslighting,” “stonewalling,” “deflecting,” and “projecting.” On top of that, she called him a narcissist. It looks like the model may still harbor some feelings towards AE, who she said she still had feelings for.

“I wish it was easy to ‘fix him’ but that’s not for me to do. The pain cuts so deep especially when children are involved,” she wrote on her Instagram Story following the exposè. “I will always love him so much but I know I can’t heal him only he can do that.”

Do you think AE has a shot at getting the family back together? Let us know in the comments.