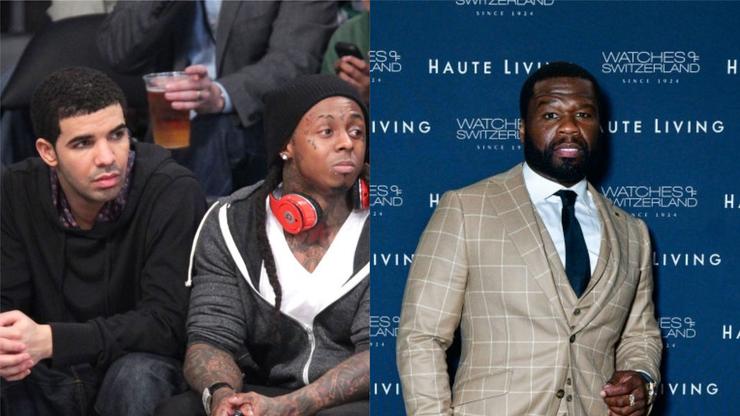 50 Cent thinks Lil Wayne vs. Drake on Verzuz should happen.

The culture has spoken and it absolutely loves Timbaland and Swizz Beatz‘ Verzuz battles, which has recently included the likes of E-40 and Too $hort, as well as Jeezy and Gucci Mane. The series, which puts two iconic artists against each other to celebrate their longstanding careers in the game, has prompted discussions on which artists would be suitable to face off next. One of the main suggestions has been for 50 Cent and Ja Rule to battle out their differences in front of millions of live viewers, but that’s reportedly doubtable. One of the men involved in those talks is proposing another fight though, and it’s sounding enticing.

50 Cent has been running some press for his Branson Cognac brand, and he was also answering questions about other popular topics, like Verzuz, this week. The rapper spoke about the running series, suggesting that Drake and Lil Wayne should go up against each other.

Much like they did in the Drake vs. Lil Wayne tour, 50 Cent wants to see a repeat of that, saying: “I think because of the momentum, the best thing would be [Lil] Wayne vs. Drake. To keep it real with you. There’s two different styles in the same period so it will be entertaining enough to watch both of them.”

He said that it would be similar to him and Eminem facing off, considering Lil Wayne also gave Drake an opportunity to shine. However, he doesn’t think Lil Wayne vs. Drake would be as entertaining as Gucci Mane’s “Smoking on Pookie Loc” line during his fight with Jeezy.

Do you think Lil Wayne vs. Drake could ever happen?