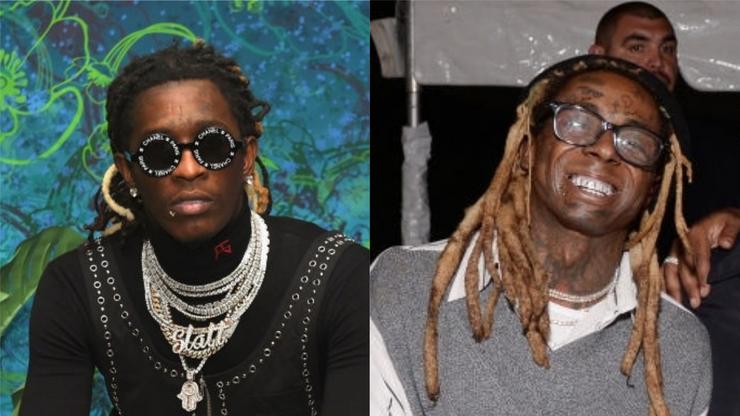 Young Thug revealed that he’s got a tattoo of Lil Wayne’s name on his arm.

Young Thug has been in the headlines for the wrong reasons this week. First, the Atlanta native was caught up in a quasi-scandal with his longtime girlfriend Jerrika Karlae, who seemingly called him out on social media for “abuse”. Thug responded by telling the world that he had been single for the last two years, which was news to a lot of his fans. Then, his interview was released with Gillie Da Kid and Wallo on the Million Dollaz Worth of Game podcast, which has only intensified the situation for Thug.

His comments about Jay-Z, specifically about how he believes he has more stadium hits than the legend, have gone viral, as well as his Verzuz challenge to Lil Wayne. Additionally, he spoke about his first meeting with Lil Wayne, singling in on how Tunechi left him hanging when he went in for a handshake, leaving a sour taste in his mouth. There isn’t any bad blood though, as Thug revealed that he’s actually got his idol’s name tattooed on his arm.

When Gillie Da Kid asked about the negative energy between Thugger and Wayne, Thug went on to explain that he feels as though Wayne thought that he was trying too hard to be the “next” version of him. “I got that n***a name tattooed. This n***a’s name tattooed, it’s gang,” said Thug, showing the hosts of the podcast. “He knew [I was a fan], for sure. I’m honest. I’m just a real person. I don’t know how to be in a room and be fake.”

It’s not uncommon for Young Thug to have a tattoo of another artist on his skin. He also previously claimed that he and Future have each other’s names tattooed.

Watch the full podcast above, and tune in at 16:39 for this story.