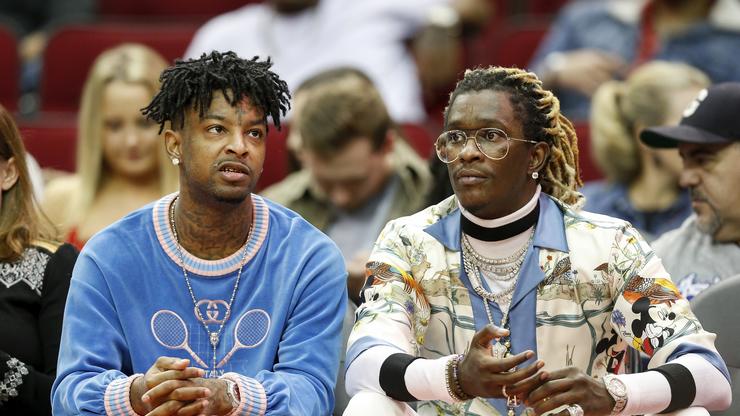 Young Thug knows how to spoil his friends. While stories have been told of Thugger’s selfless nature, and extraordinary gift-giving, he really did show out for two of his close friends in the rap game. On Friday, 21 Savage hosted a massive FreakNik-themed birthday bash in Atlanta where he was joined by a slew of his close friends including Young Thug.

By now, you’ve probably caught a glimpse of the viral footage of the customized ride Thug gifted 21 Savage for his 29th birthday. Per TMZ, the ride cost Young Thug upwards of $150K. The rapper went over to Roadshow International car dealership in ATL where he purchased a Dodge Hellcat TRX which cost anywhere from $60K to $72K alone. However, it was the modifications that pushed the price point to over double its original amount.

The car’s exterior includes patterns of the dagger that 21 Savage has tattooed on his forehead, as well as massive 21 Savage logos on the doors. On top of that, Thug got a cartoon version of 21’s face emblazoned onto the seats.

The owner of Roadshow International, Herm, said he got all of the customizations done in three days before Thug dropped it off for 21.

On top of the new whip for 21, Thug also blessed Drake with a new chain for his birthday. Thug hooked up Drizzy with a customized OVO pendant which includes a photo of Drake and Adonis on the back.

Get a closer look at 21 Savage’s new whip below.