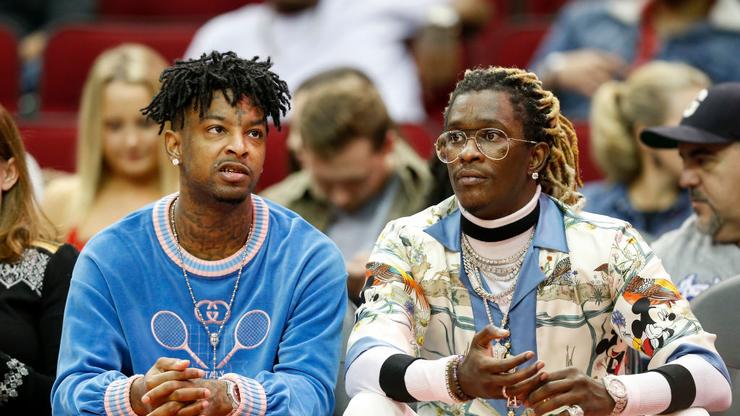 Young Thug is celebrating his thirtieth birthday today, and dozens of his close friends are rushing to send him some love on his big day. Drake beat the crowd to send him a late-night message on Instagram Stories, dedicating an entire post to the Atlanta rap icon, but 21 Savage was actually with the superstar on Sunday night, where he decided to tease him a little.

Instead of acting all buddy-buddy with Thugger, 21 Savage chose to get under his friend’s skin, calling him the “birthday girl” and seeing how he would react. Apparently, Jeffery wasn’t very pleased.

Sharing a video of the exchange on Instagram Stories, the “Bank Account” rapper trolled Young Thug before having his phone snatched out of his hands. “Look at the birthday girl,” said Savage, showing Thug counting money at the club. He instantly got up and angrily grabbed the device out of his hands without saying a word. Clearly, he wasn’t so enthused about being misgendered.

This morning, Young Thug posted plenty of photos and videos for his birthday, re-sharing Drake‘s message and dropping off a lot of shared pics with Nipsey Hussle, whose birthday was one day earlier than Thug’s. However, he hasn’t said anything about 21 Savage pissing him off at the club.

Tonight, Thug is holding a massive party in Atlanta, Georgia for his thirtieth. Check out all the details below.