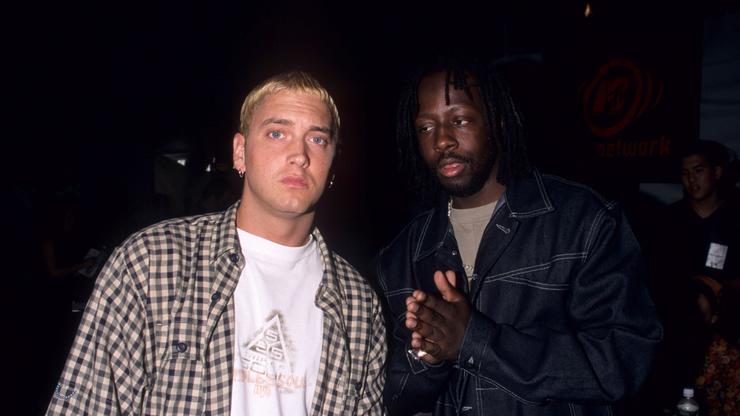 The Fugees icon jokingly shares the story of Busta trashing his tour bus after listening to Em’s “My Name Is.”

There are plenty of artists who can tell you their reactions when they first heard Eminem. Back in the 1990s, Dr. Dre was shaping his Detroit protegé into becoming the biggest rapper in the world, and it is safe to say that his vision was a successful one. However, many rappers at the time did not know how to accept this white rapper who boasted about violence against his mother and his poor upbringing.

Overall, the general consensus seemed to be disbelief with some thinking that Eminem was Black before seeing him face to face. While chatting with Hip Hop is Real, Wyclef Jean recalled being there when Busta Rhymes first heard Em and he reacted by wreaking havoc.

“My Eminem experience, it was so…it was Eminem and Canibus,” said Wyclef. “So, here’s my Eminem experience—Busta Rhymes will tell you. When he came on my tour bus, he literally broke my tour bus.” Apparently, Jimmy Iovine sent him a cassette tape of Eminem’s “My Name Is” and when it played, Busta was sent into a tizzy.

“He trashed my tour bus,” Wyclef added. “You still owe me for my tour bus. But you know, Busta’s a giant. What are you gonna tell him? He’ll take you apart with one hand.” The rapper was questioned about why Bussa Buss had such an emotional reaction to hearing Em. It may have been destructive, but it was positive.

“He went crazy! Til today, I have nightmares of this thing. Busta trashed my beautiful tour bus after listening to this Eminem song.” Wyclef then went into speaking about the beef between Eminem and Canibus, saying that he still wishes he could get them together for a battle with the hopes that they will one day lay all of the animosity to rest.