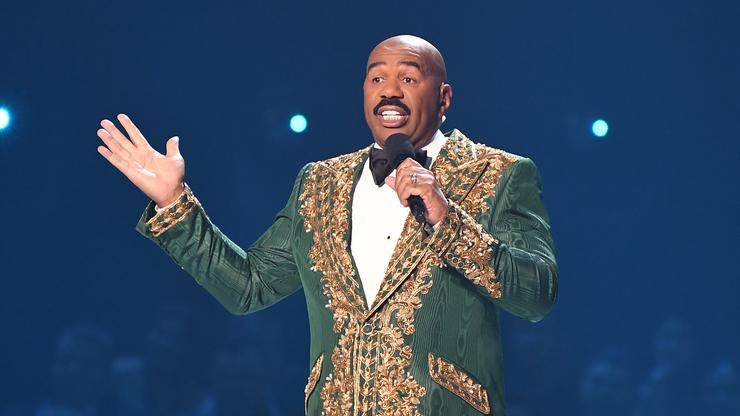 He addressed why he hasn’t done more standup comedy in recent years and said if he did, “It will end my television career.”

There are a select number of fans who love Steve Harvey from hosting Family Feud, the Miss Universe competition, or even his Think Like a Man moment in pop culture, but longtime fans recall him being a hungry, touring comedian in his early days. He appeared on Def Comedy Jam and starred in the King of Comedy standup film directed by Spike Lee, so if there is anyone who knows the ins and outs of making people laugh, it’s Harvey.

Although he is more family-friendly these days, Harvey was known for his outrageous takes and controversial jokes that stunned the public while also bringing a roar of applause. Some have called for him to return to the comedy tour circuit, but the mogul recently shared why he doesn’t believe audiences will accept him with open arms.

“The only way I can do one more special is if it’s at the end of my television career because it will end my television career,” Harvey said. “We’re in the cancel culture now. No stand-up that is sponsor-driven can say anything he wants to. Chris Rock can’t. Kevin Hart can’t. Cedric the Entertainer can’t. D.L. Hughley can’t. I can go down the list. The only person that can say what they want to say on stage is Dave Chappelle because he’s not sponsor-driven. He’s subscription-driven.”

“If I had tried to continue as a stand-up, there’s no way I could maintain it. Political correctness has killed comedy. Every joke you tell now, it hurts somebody’s feelings. But what people don’t understand about comedians is that a joke has to be about something. It has to be about somebody. We can’t write jokes about puppies all the time. The joke can’t be about bushes all the time. Some of these jokes will have to be about people, because that’s the most interesting topic.”

He reiterated that because he’s not done with other aspects of his career so that comedy special would have to wait. “I want to do one more. I’ll probably have to call it ‘This Is It.’ Check out a clip from Judge Steve Harvey below.