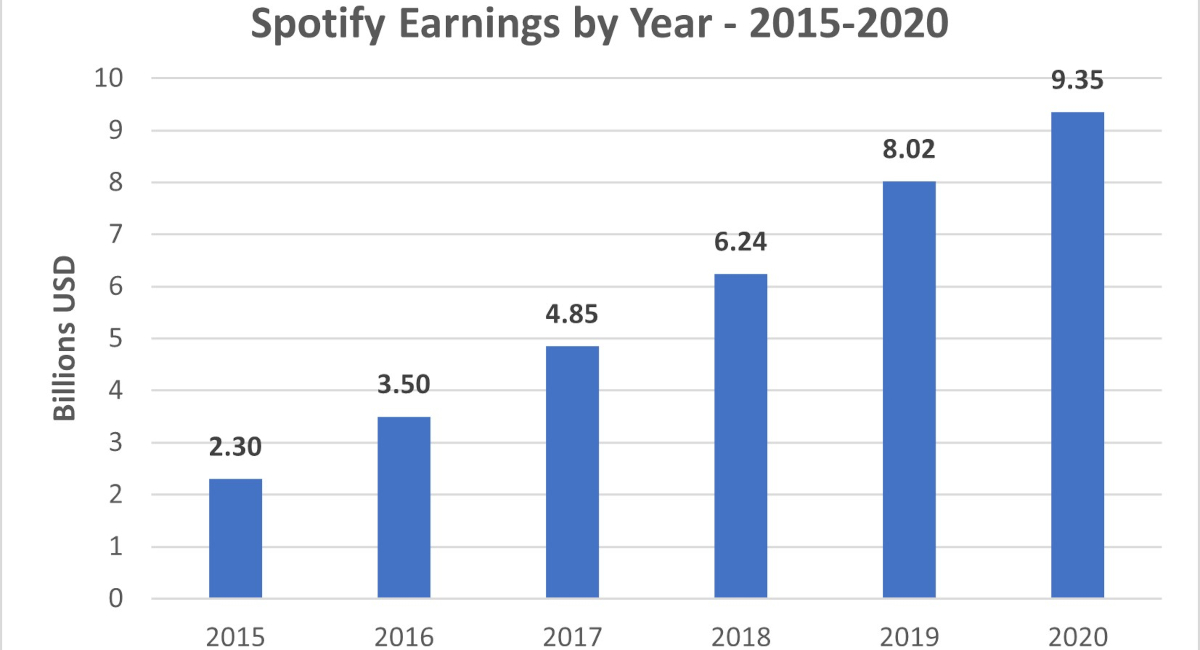 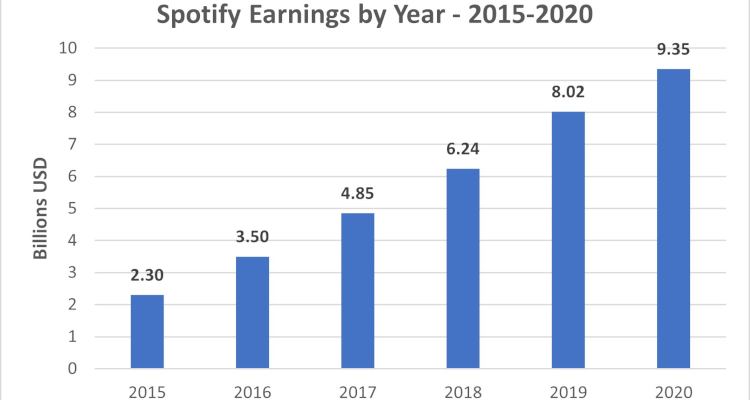 Spotify earnings by year (in billions USD) between 2015 and 2020, based upon the Euro-USD exchange rate at the time of this piece’s writing. Photo Credit: Digital Music News

Since going public via a direct listing in April of 2018, Spotify (NYSE: SPOT) has been the subject of ample investor discussion and speculation. Here’s a comprehensive overview of Spotify earnings, including the Stockholm-based company’s latest quarterly results and performance outlook according to financial professionals.

Founded by Daniel Ek and Martin Lorentzon in 2006, Spotify has emerged as today’s leading music streaming platform, with availability in nearly 180 countries and territories around the world. During the last few years, the company has continued to add a substantial number of artists, songs, and monthly active users (MAUs), while also making large investments in podcasting and other forms of audio entertainment in an effort to diversify and increase Spotify earnings.

To be sure, the service pays the majority of its revenue to rightsholders – namely the “big three” record labels, Warner Music Group, Universal Music Group, and Sony Music Entertainment – for on-platform music streams. Consequently, some financial professionals closely monitor the performance of Spotify’s podcasts and two-sided advertising initiatives, viewing these and similar non-music endeavors as a potential means of moving past licensed music’s razor-thin margins.

In its Q1 2021 earnings report – covering the three months ending on March 31st, 2021 – Spotify reported total revenue of €2.147 billion, or about $2.55 billion based upon the exchange rate at the time of this piece’s writing. The sum represents a small dip from Q4 2020, and as has historically been the case, the lion’s share of the income (€1.931 billion/$2.29 billion) derived from premium subscribers, who pay a different monthly fee (and generate a different amount per stream) depending on their country of residence.

The remaining €216 million/$256.13 million or so came from ad-supported accounts, marking a 46 percent year-over-year improvement (due chiefly to a pandemic-driven advertising falloff in early 2020) but a 23 percent dip from Q4 2020; premium revenue, on the other hand, improved by 14 percent YoY and two percent QoQ.

Also worth noting is that Spotify added 400,000 podcasts during the three-month stretch, for a total of 2.6 million programs. Notwithstanding a “strong increase” in “podcast consumption hours,” however, the podcast engagement rate (not necessarily start-to-finish listens) “was consistent with Q4 levels,” which had come in at 25 percent.

And despite the decline in ad-supported earnings and the minimal improvement in premium income, the Q1 2021 Spotify earnings signify a major jump from 2019 and previous years – a jump made possible by the addition of MAUs, with an emphasis on the more fiscally significant premium users. 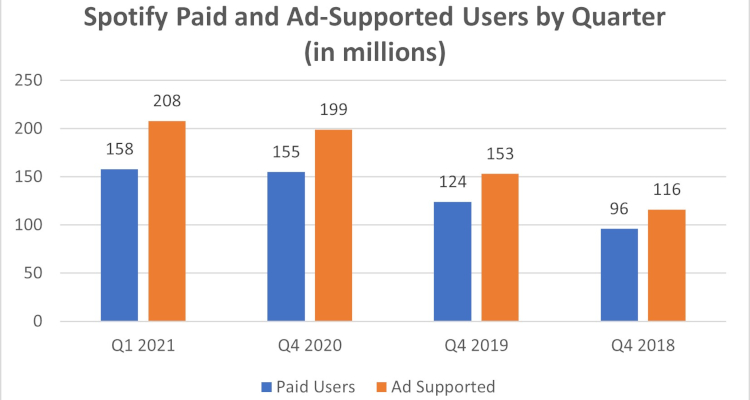 Analyst Predictions – Where Will Spotify Earnings Go From Here?

Monness, Crespi, & Hardt analyst Brian White held his SPOT buy rating, with a $380 target price, while acknowledging that the relatively flat MAU growth in Q1 2021 was “a point of concern.”

“We have found the market often takes issue with a particular data point during a Spotify earnings call and the stock subsequently plummets; however, we believe the fundamental trends continue to move in the right direction. As such, we view today’s selloff as another attractive buying opportunity,” continued White.

JPMorgan analyst Doug Anmuth reduced his SPOT target price from $385 to $330 and maintained an overweight rating, meaning that he believes the stock will “outperform average total return of stocks in” his and his team’s “coverage universe over next 6-12 months.”

Stifel analyst John Egbert maintained SPOT’s buy rating – and $360 target price – in late April, stating that the streaming platform’s Q1 performance was “relatively in line with expectations and toward the high end of guidance.”

What to Look For in Future Spotify Earnings Reports

Aside from the obvious metrics – subscribers and revenue among them – it’s worth closely monitoring podcast-listenership stats and the results of podcast-monetization efforts, as well as income attributable to two-sided marketplace deals, in future Spotify earnings reports.

The company has made a sizable bet on the long-term potential of podcasting, with regard to exclusive programs and otherwise, and two-sided marketplace deals (including sponsored recommendations and Discovery Mode) could dramatically bolster Spotify earnings if widely implemented.