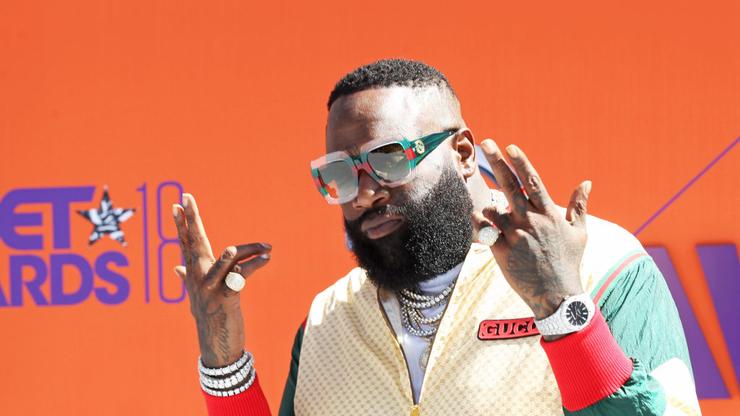 Rozay is in a great mood ahead of his highly anticipated car show in May.

Rick Ross is living his best life. Less than a week after going viral for his antics on The Breakfast Club, Rozay once again has the internet laughing, this time live from his own estate, The Promise Land, where a friend filmed him getting his groove on earlier this weekend.

“Friday Mood,” the 46-year-old captioned a video clip shared to his feed on April 29th that finds him practically skipping down the stairs of his beautiful Atlanta home, a glass with a gold rim in one hand, and a very full bottle of liquor in the other.

For his outfit of the day, Ross threw a bucket hat on his head and pulled on a pair of shorts, but other than that, his flashy chain, and his Clarks shoes, he left himself exposed, living freely.

Down in the comment section, friends like Dave East, Lil Yachty, and 2 Chainz were quick to let the Biggest Boss know his video had them laughing, dropping off plenty of emojis.

In his aforementioned stint on The Breakfast Club, Ross made waves when he asked Angela Yee if she’s “a squirter” while also claiming that no woman has ever faked an orgasm in the bedroom with him.

“When Rozay in the zone… You can’t fake that mess they make for Rozay! That splash! You woulda thought the fire alarm come on the way that splash come out. You can’t fake that. You feel me? That’s what I look forward to,” he told hosts – read what else the 46-year-old had to say here, and tap back in with HNHH later for more celebrity news updates.