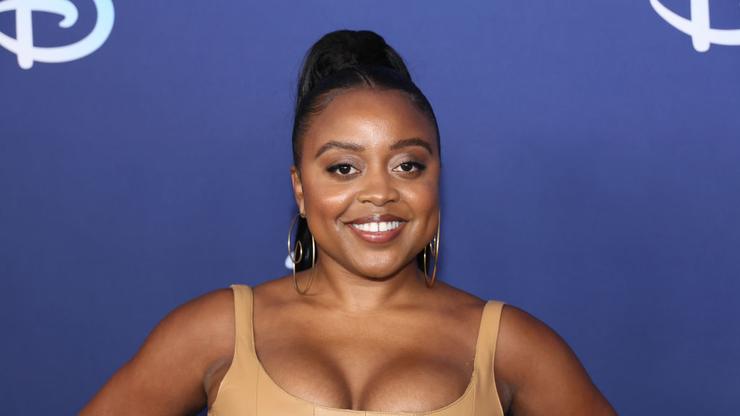 “Tomorrow maybe I’ll be mad at him.”

The 2022 Emmy Awards was a historic night for Black artists both in front of and behind the camera. Sheryl Lee Ralph made history with her first Emmy win, becoming the second Black actress ever to win Best Supporting Actress in a Comedy Series. Lizzo and her hit Amazon show Watch Out for the Big Grrrls won Outstanding Competition Program and Outstanding Directing. Quinta Brunson’s Abbott Elementary was also a big winner at this year’s ceremony, with the 32-year old writer winning her first Emmy for Outstanding Writing For a Comedy Series.

Aside from her groundbreaking win, it was Jimmy Kimmel lying across the stage during Quinta’s acceptance speech that has social media in a frenzy. “If #QuintaBrunson stepping over #JimmyKimmel who literally laid in her spotlight on the day she won an Emmy isn’t a metaphor for what it means to be a WOC in a white mans world I don’t know what is,” one fan tweeted. Quinta responded to incident shortly after, telling the press, “The bit didn’t bother me. Honestly, Jimmy gave me my first big late-night spot, he was one of the first people to see Abbott Elementary.”

The award winning star continued, “He was the first person to message me on Instagram. He was so excited it was going to be on ABC. I was happy it was Jimmy. He’s one of the comedy godfathers. Tomorrow maybe I’ll be mad at him.” After receiving much backlash from his odd comedy bit, Kimmel joked about crashing Quinta’s spotlight at an Emmy Awards After Party, saying “I had my eyes closed, I had no idea where I was. It was one of the weirdest things that’s ever happened to me.” He went on to praise the famed writer and the success of Abbott, gushing, “[Quinta] is so unbelievably talented. And I saw her pilot before it came out on ABC, and I wrote to her, and I was like, ‘I don’t know how we got this, but congratulations. She’s a lovely person as well.”

Check out Quinta Brunson’s acceptance speech below. Share your thoughts on the incident with HNHH.