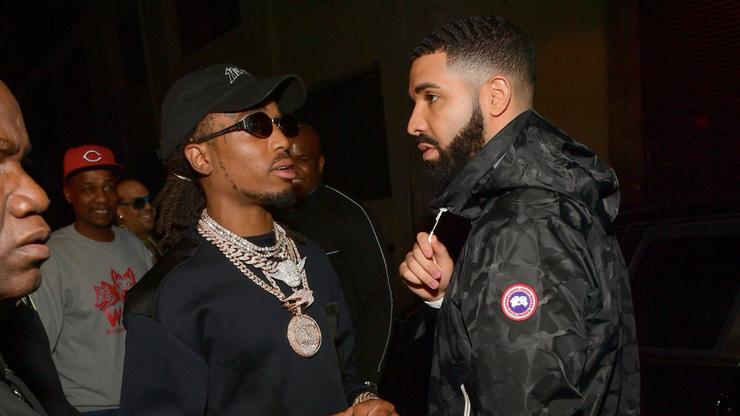 Exactly how much money did you win, Q?

Drake appears to owe his good friend Quavo a hefty chunk of change following yesterday’s college football national championship game between the Georgia Bulldogs and the Alabama Crimson Tide. Both rappers didn’t hesitate to publicly post about their ongoing bet on their Instagram Stories as the event played out, but ultimately it was the Migos‘ member’s team that took home the trophy.

“U kno why I’m here @champagnepapi. We are locked in we are down,” Quavo wrote on an upload from January 9th. Seeing as he’s Atlanta-born and bred, it’s safe to assume that the 30-year-old was rooting for the Dawgs, while his “Walk It Talk It” collaborator cheered on the Tide.

Drizzy responded to his friend’s post on his own page, confirming his Alabama alliance. “Just run me my bread right and nice and slow, no sudden movements. #ROLLTIDEROLL.“

As 11Alive points out, neither recording artist divulged how much money was at stake over the game, but we’re willing to bet that it’s more than a casual $50. While chopping it up on a Bleacher Report podcast in September of 2021, Q admitted to losing as much as $50,000 to Champagne Papi on similar sports bets, but it’s entirely possible that this one could be even bigger.

At the end of the day, the Bulldogs conquered 33 – 18, which means that the 6ix God will be the one running Quavo his bread, and not the other way around.

How much money do you think Drake owes the Quavo Huncho hitmaker? Leave your predictions in the comments below.