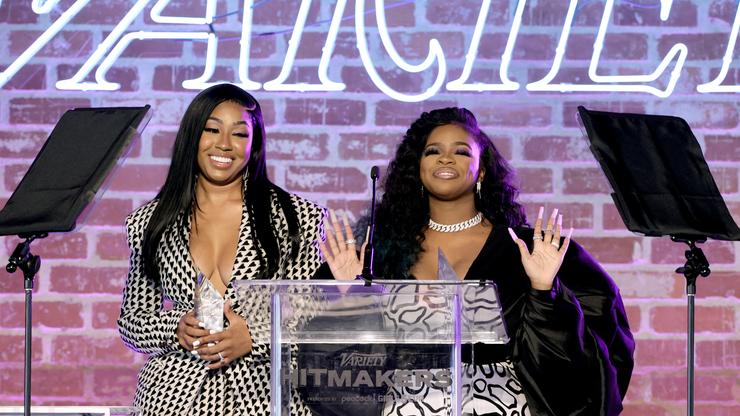 Yesterday’s Variety Hitmakers Event saw famous faces from all over come together to celebrate some of the biggest moments of 2021. Chloe Bailey, Lil Nas X, Jack Harlow, Pusha T, City Girls, Avril Lavigne, Olivia Rodrigo, Lana Del Rey, and countless others were all in attendance, showing off their stylish outfits, accepting their awards, and chatting with the press about what they’ve got in store for us next.

“Have Mercy” singer Chloe Bailey was selected to honour her fellow Georgia native, Lil Nas X with the Innovator Of The Year award. “There couldn’t be a more appropriate honour for Lil Nas X,” she said with a smile.

“He has embodied the spirit of courage, also representing the culture authentically and beautifully. Maybe once in a generation an artist comes along that literally changes the world for the better. Your impact is beyond pop and hip-hop, and music in general.” Following her heartfelt speech, Nas shared a clip to his Twitter page, writing, “she made me tear up fr.”

23-year-old Jack Harlow was also honoured, taking home the Hitmaker of Tomorrow award. “I think if you took a picture of me on this stage, and showed that kid, he’d be pretty blown away,” the “Way Out” rapper told the crowd. “To be honest, all the ingredients were there. It was a competition, and it brought out the competitor in me, which is a big part of the genre I’m in.” He then thanked all the books he read when he was younger for helping him get to where he is today as the audience let out a round of applause.

Yung Miami and JT were also in the building to accept the Future is Female award. “Y’all always push us,” the “Ex For A Reason” collaborator told listeners. “It’s easy to lose sight when things not happening as fast as you want it to happen, but we have a team that stays on top of us because we’re like normal girls, sometimes we want to be rappers, and the next day we want to be…” “With our man,” Miami chimed in, sending the friends into a sweet bout of laughter together.

Pusha T took to the stage as well, accepting Steven Victor’s Hitbreaker Of The Year award for Pop Smoke’s posthumous project. Check out footage from his speech below.