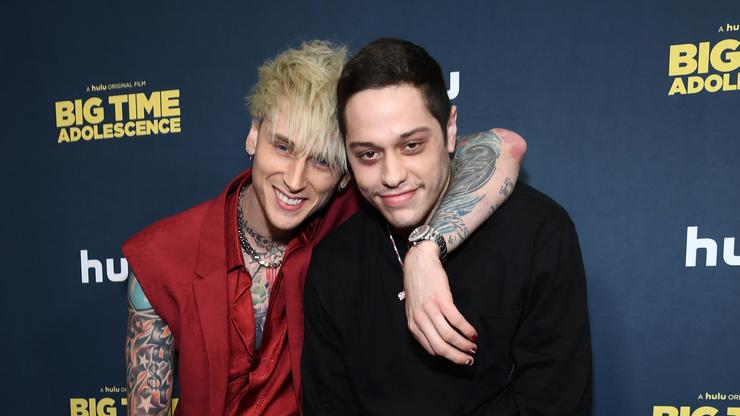 Last weekend’s episode of Saturday Night Live was jam packed, to say the least. Host Kim Kardashian absolutely killed it with her hilarious opening monologue, and Halsey performed “I am Not a Woman, I’m a God” and “Darling” with the help of Lindsey Buckingham. The latest part of the show that’s got people talking though, is Pete Davidson’s portrayal of Machine Gun Kelly.

The Dirt actor is currently dating Megan Fox, and is frequently spotted on double dates with Travis Barker and his girlfriend, Kourtney Kardashian. Seeing as Kim was featured on the show, it only makes sense that her superstar family members somehow be included as well.

One of the evening’s skits saw Kim assume the part of her oldest sister, while Pete Davidson took on the role of Kelly, also known as Colson Baker. The King of Staten Island star rocked a blonde wig, and according to Page Six, he wore the same outfit the musician donned for the 2021 iHeartRadio Music Awards.

While he may have gotten the look right, Davidson’s dopey voice didn’t exactly get his buddy’s seal of approval.

“Pete you know damn well I don’t talk like that,” the rapper-turned-rocker posted on his Instagram story, along with a clip from SNL.

MGK couldn’t have been too upset though, as he also shared a sweet screenshot from a FaceTime call with the actor in costume, captioned, “twins.”

On Twitter, the 31-year-old even suggested that it may be time for him to come on Saturday Night Live and try his hand at impersonating Pete.

Kelly was actually featured as the musical guest on the late night show back in January of this year. Watch his performance of “lonely” in the clip below.