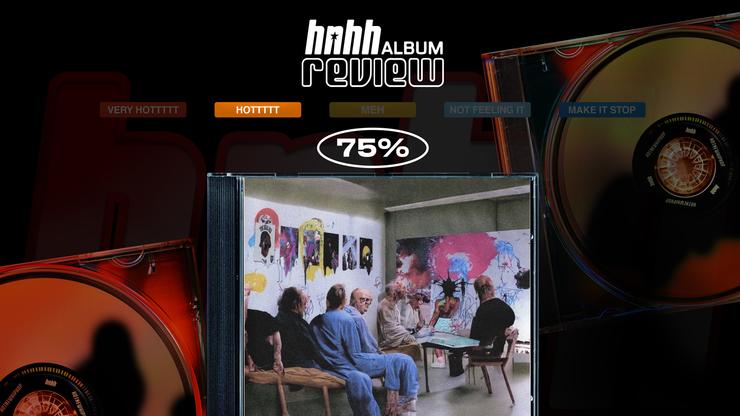 For the first time since 2020, Lil Uzi Vert is back with a new solo project.

Titled RED & WHITE, the Philadelphia native’s latest release is an eccentric ten-track EP that serves as an appetizer for the long-awaited follow-up to their sophomore studio album, Eternal Atake/Lil Uzi Vert V. The World 2. Initially released as a SoundCloud exclusive, RED & WHITE marks a return to form for Uzi, as they go back to the platform that made them a household name, and channel the carefree creative energy that powered early projects like Luv Is Rage and Lil Uzi Vert V. The World 2.

The result, however, is an exhilarating, yet mixed bag of tunes from Hip-Hop’s resident alien.

On one hand, the breezy effortlessness of Lil Uzi Vert’s past work is starting to show cracks on RED & WHITE. Although it’s a long shot to say that Uzi is actually struggling to pump out energetic and off-the-wall hits, the lack of effort on select tracks — most notably the blindly raging “ISSA HIT” —  just comes off as lazy rather than ingenious. The long-teased “I Know” — which hardcore fans have been begging for since 2017 — falls a bit flat. If it wasn’t for its incredibly zany Sonny Digital production and admittedly hard verses, “I Know” would otherwise be a skippable track due to its insufferably repetitive hook. Even the non-gender-conforming banger “GLOCK IN MY PURSE” sounds a bit underbaked, as Uzi goes from proclaiming himself to be “the best rapper from Philly” to delivering cheesy lines like, “If you got beef with me (Beef)/Better make you some chili (You better).” However, like nearly all of the other tracks on RED & WHITE, Uzi’s playful charisma is strong enough that listeners will likely just gloss over what appear to be subpar freestyles.

RED & WHITE also features the reunion of Lil Uzi Vert and Maaly Raw following their heated dispute in 2019. As expected, the duo sounds as fresh as ever. The two Maaly Raw-produced tracks, “FLEX UP” and “BELIEVE ME,” stand as the most memorable songs on the EP, with the latter serving as the wildest song on the project — both production- and performance-wise. Apart from Maaly Raw’s contributions, producers such as Dun Deal, Hittkidd, Don Cannon, Mustard, and Ooggiemane appear on RED & WHITE. Even with so many impressive producers in the credits, the album is riddled with forgettable beats.

Yet, even with all of those aforementioned cons, RED & WHITE still manages to serve as a welcomed effort from Generation Now’s signature act. There are plenty of bright spots throughout the EP, from the high octane “HITTIN MY SHOULDER” to the wavy BEATSBYJEFF-produced “FOR FUN.”  Of all the songs, however, the final track — titled “FINAL FANTASY” on SoundCloud and simply titled “F.F.” across other streaming platforms — is arguably the best takeaway from the entire EP. The RED & WHITE closer finds Uzi floating over Brandon Finessin and 1Esko’s cinematic production, with quotable lyrics sprinkled throughout the hook (“Final Fantasy, this a new life/Final Fantasy, this a trilogy)/Final Fantasy, this not Moonrock/Probably smokin’ on my latest enemy”) and the seamless verses (“I’m a space cadet, Final Fantasy/She said, ‘Uzi, can you f*ckin’ land in me?’/P*ssy pink, I pull up in some salmon seats”). Complete with some emotional wailing mid-track, “F.F.” is easily the most polished track on RED & WHITE, and hopefully, it offers some indication as to what fans can expect from Uzi moving forward.

All in all, RED & WHITE feels less like a complete body of work and more like a random collection of Pink Tape testers, unreleased tracks, and throwaways. Since it is labeled as an EP, it gets a slight pass for its haphazard construction. However, as hype for their third studio album grows more and more every day, this EP has made it clear that Lil Uzi Vert’s new sauce needs some serious mixing before they finish The Pink Tape.