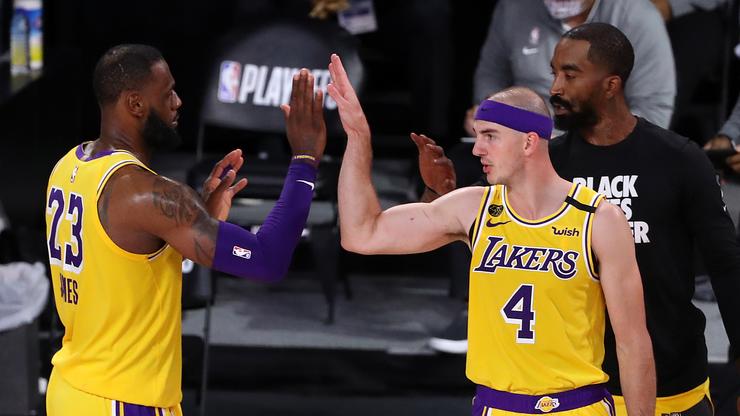 The Los Angeles Lakers welcomed back Alex Caruso to the Staples Center.

While he might not be a superstar talent, there is no denying that Alex Caruso is a special player. He is a guy who plays his role exceptionally well, and he does it with the type of confidence that you simply wouldn’t expect from a guy who started out in the G-League without a guarantee of NBA stardom. With the Los Angeles Lakers, Caruso gained cult figure status as his dunks and his hustle plays always seemed to have LeBron James in awe.

In the offseason, Caruso went to the Chicago Bulls and last night, he made his grand return to the Staples Center. The Bulls ended up blowing out the Lakers, and before the game, the team paid tribute to Caruso with a nice highlight montage. From there, Caruso and LeBron shared a moment as they hugged it out prior to tip-off.

It was a special game for the Bulls who got 27 points out of Lonzo Ball and another 38 out of DeMar DeRozan. As for Caruso, he was declared the “GOAT” on Twitter by LeBron, who followed that up by saying “my brother forever.” Clearly, there is a lot of respect between these two, and James recognizes the impact Caruso has on the game.

Caruso certainly made the right choice in the offseason, as the Bulls are currently near the top of the Eastern Conference standings, while the Lakers have struggled with mediocre play.