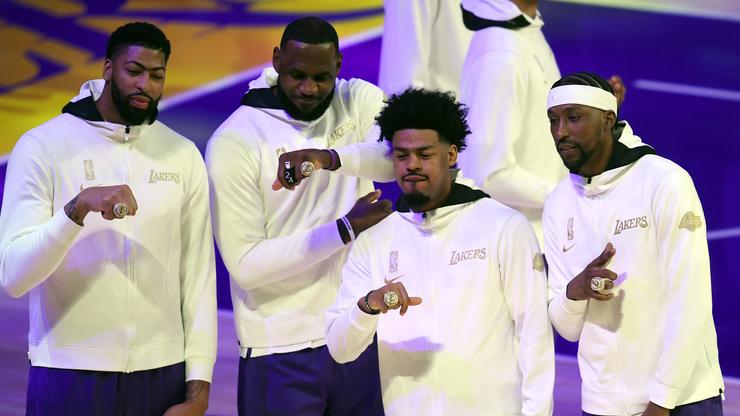 There were many details included in the craftsmanship, including a Black Mamba.

After taking home the 2020 title, the Los Angeles Lakers have received their championship rings. The year began on a sorrowful note after Kobe Bryant tragically lost his life in a helicopter crash along with his 13-year-old daughter Gianna and their seven friends. The outpouring of emotion from Los Angeles residents, Lakers fans, and admirers of Bryant was palpable as the grief over his loss reverberated globally. The Lakers wanted to honor Kobe once again, and this time they called on Jason Arasheban, or famed jeweler Jason of Beverly Hills, to design their championship rings.

“I’m used to these last-minute orders because I also service over 200 guys in the league as personal clients, including a bunch on the team,” Arasheben told ESPN. “So I’m used to this, ‘Hey Jason, it’s two days from Christmas, but I need you to make this custom piece for me for my wife.'” As a longtime Laker’s fan, being given the task of designing the team’s rings was something that he welcomed with open arms.

“That was actually the fun part about this particular ring, is that there was so much story to tell,” Arasheben said. “This was a season unlike any other in history.” There were significant  moments that were included on the massive ring: “To recognize the 95 days the Lakers spent in the Orlando bubble, each of the 17 purple amethyst stones comprising the ‘L’ on the ring’s face weighs .95 carats — and of course the 17 signifies the 17th championship in franchise history.”

Additionally, the rings boast .52 carats for the 52 regular-season wins, the word “unity” to represent how all NBA teams joined together for social justice this year, and a Black Mamba is included for the late Kobe Bryant. The championship ring also has a detachable top.

“We created a removable top that exposes the rafters that are up in Staples Center with [jerseys of] all of the retired Laker greats, with a special emphasis put on Kobe’s No. 8 and No. 24 jersey, and it’s set on a snakeskin-texture background,” Arasheban added. Check out a few images of the iced out Lakers rings below.