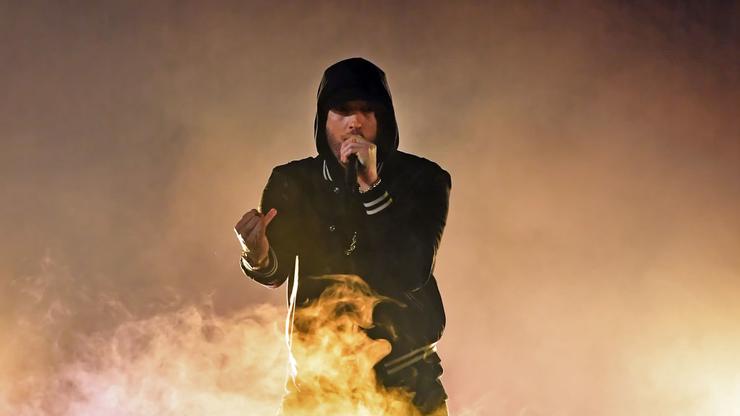 With rumors of Eminem’s “Music To Be Murdered By: Side B” spreading like wildfire, KXNG Crooked took a moment to speak on the leaked intel.

Though artists have largely taken to the surprise release format, thereby rendering premature leaks relatively-last minute, this month has seen at least three big releases ravaged by rumor and intrigue. Playboi Carti‘s Whole Lotta Red, J. Cole‘s The Fall Off, and most recently, the possible “Side B” of Eminem’s Music To Be Murdered By.

In the latter’s case, speculation sparked after director Cole Bennett, with whom Em worked on the “Godzilla” video, was spotted in Detroit’s 8 Mile area. Shortly thereafter, a new picture surfaced placing a bearded Eminem in front of a green-screen. It didn’t take long for the floodgates to open up, and with it came an influx of possible Music To Be Murdered By: Side B intel. While an admittedly convincing cover gave the rumor some credibility, an ensuing tracklist featuring Royce Da 5’9″, Cordae, Westside Boogie, and more left Stans scratching their heads. Utterly disoriented, they turned to KXNG Crooked, who has generously kept his channel open to their Em-related queries.

“Dear Stans,” begins Crook, after fielding an influx of curious questions. “I can absolutely not confirm ANYTHING that has my logo on it. Sorry guys.” It should be noted that while he did share the tracklist that has been circulating across social media, Crook was not actually featured on the twelve-track effort, though his COB logo is included in the bottom right corner. Speaking of features, it should be noted that both Cordae and Westside Boogie have recently changed their names, with the tracklist here using their older monikers.

With the rumored release date for Music To Be Murdered By: Side B slated for Friday, December 18th, we won’t have to wait much longer to receive confirmation. Though it is unfortunate to see Slim’s best-laid-plans derailed by leakers, we’d be lying if we said we weren’t eager for another dose of murderous music from Slim Shady. Check out Crook’s comments on the rumor below, and be sure to peep our extensive conversation with the legendary Slaughterhouse lyricist right here.