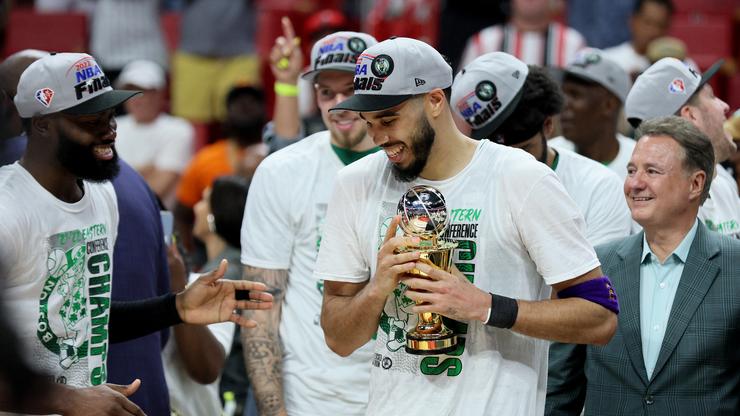 Jayson Tatum had himself a series.

Jayson Tatum and the Boston Celtics punched their ticket to the NBA Finals on Sunday night as they defeated the Miami Heat in Game 7 of the Eastern Conference Finals. It was a very close game as the Celtics escaped with a 100-96 victory. Tatum played solid throughout the match and his efforts throughout the series earned him the inaugural Larry Bird Eastern Conference Finals MVP Award.

This was a huge win for Tatum and the Celts as it is their first NBA Finals appearance since 2010. The current version of the Celtics have been to the conference finals but they had never gotten this far before. Now, they will play the Golden State Warriors in what should be an epic matchup.

After the match, Tatum took to Instagram where he posted some photos from the game and its aftermath. Clearly, Tatum is over the moon about his latest accomplishment and there seems to be a real belief that they can knock off the Warriors. The Celtics have incredible defense and are always a threat on offense.

As you can see down below, Tatum also sent Kobe Bryant a text message prior to the game. Tatum is a Kobe disciple and in the text he wrote “I got you today.” Needless to say, he had Kobe’s spirit on his side.

The NBA Finals are going to start on Thursday and if the analysts are correct, this should be a very long and entertaining series.