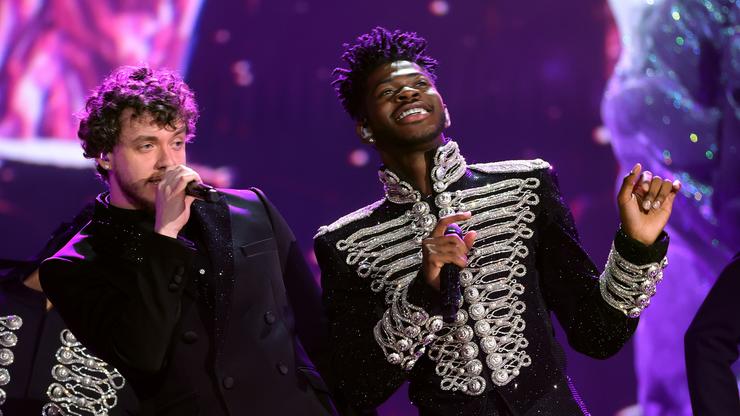 The pair collaborated on “Industry Baby” and while the backlash they both received was heavy, the song climbed the charts.

‘Tis the season for a Jack Harlow takeover as the rapper has become the talk of Hip Hop. Today (May 6), Harlow’s Come Home The Kids Miss You officially hit streaming services and the album has remained a trending topic since its release. We’ve also received several new interviews from Harlow and in many of them, he touched on adding his voice to Lil Nas X’s “Industry Baby” hit.

The track arrived with controversy as Lil Nas X and Harlow joined together for an LGBTQIA+-friendly music video, but the homophobic reactions were something that didn’t sit well with the Kentucky rapper.

“The totally inappropriate reaction to him lets you know that we still have some progress to be made,” Harlow told The Guardian. “And you hear it in passing; there’s still some homophobia going on. But he’s taking the hit that artists won’t have to take in the future. That’s what makes him a hero.”

In a separate interview with Zane Lowe for Apple Music 1, Harlow spoke about “Industry Baby” as a piece of his legacy that he would look back on fondly.

“I felt like as I was recording the verse, I felt like in 10 years, I’m going to be very proud of this,” he said. “I feel like my grandkids are going to see this, and once they understand the context of everything, they’re going to be like, ‘Wow. My grandpa did the right thing. It’s tough.’ Yeah, I definitely was like, ‘This is fun. This is progression.’ That’s one thing, the success I’m having, and people are coming around, and the music is working, but one thing I’m really looking forward to next is, I know I have to make contributions… and do new sh*t, push the sh*t forward.”

“I’ve done some things, I’m having some success, but I haven’t fully added my branch to the tree of hip hop yet. I haven’t brought my branch where people can point and Jack Harlow and say, ‘Here’s what he added that no one was giving us before.”‘ I fully plan on doing that. And I’m not saying that’s what that was, but that decision to me felt like one of those steps of like, not everybody would take that step, but it made total sense to me. The song was good, he’s amazing. I loved making the decision. It felt really good.”

If you haven’t already, check out Harlow’s Come Home The Kids Miss You below.