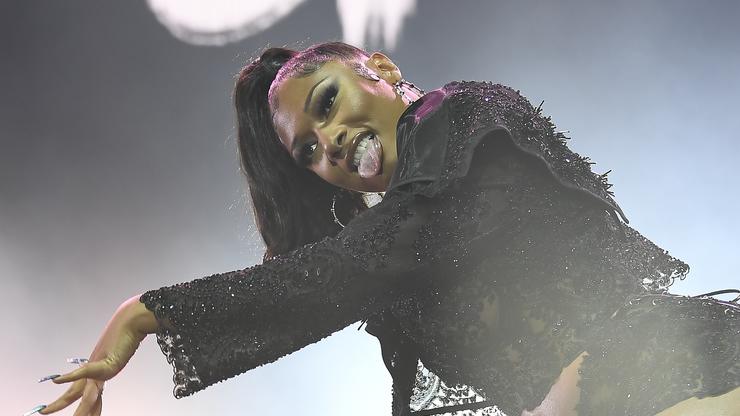 Megan Thee Stallion‘s booked and busy, and that remains just as true for her key nail tech, Coca Michelle.

The self-proclaimed visionary behind Tina Snow’s most creative and insane nail designs, the manicurist has also previously done nails for celebrities like Summer Walker, Normani, Jhene Aiko, Cardi B, and Rosalia. Michelle has been doing nails since she was six years old, thanks to the exposure provided by her family’s nail salon, and is the one responsible for the almost daily sets that Megan has been posting lately.

Image via HNHH. Photo by @TimStype.

We’ve gathered a list of Megan’s best sets below.

This set was designed for Megan’s 2020 Good News album, and is worn by Megan on the album’s cover art. The intricate design includes Megan’s name etched out in bold, mimicking a headline, along with other impossibly small details that perfectly capture a copy of a print paper.

Michelle initially tried out this set on herself, posting the demo pictures on her Instagram. The two teamed up for a picture of their nails, showing off the unique clear, geometric jade-green vision, decked out with gold jewelry decals and finished off with white tips.

Megan is widely known for her anime obsession and she has always been vocal on her Instagram about the latest shows she’s watching. She even cosplayed as Todoroki from My Hero Academia for her Paper Magazine cover. This set shows off one of her favorite anime, Jojo’s Bizarre Adventure, with the face of a different character from the show embedded on each finger. In an interview with Vogue, Michelle revealed how Megan and she formed a bond over their mutual love for anime, and how the singer put her onto the show, especially its Stardust Crusaders arc.

This Hello Kitty-inspired set flexes Coca’s versatility, as she takes a spin on the children’s cartoon show by adding in designer elements, such as the Chanel logo. The addition of super cute decals such as donuts, bows, and pearls displayed atop different pastel colors makes the set stand out.

Megan headed out to Atlanta in September sporting this set for the return of Music Midtown’s yearly festival. The blue and orange thermal cam nails matched the hot girl coach’s fit for the show, an orange “Hot Girl” crop top and metallic booty shorts.

Coca proves that not even the sky is the limit when it comes to her skills and creativity. The nail tech went hard on these galaxy nails, showcasing a different planet on each nail and countless stars and nebulas in beautiful splatters of blues, oranges, reds, and purples.

The first set of many for the spookiest month of the year, Thee Stallion shows off her simple, but hard design. Square, classic white nails are coupled with a dripping blood design styled in a stiletto shape to look like blood on teeth.

Continuing on the spooky theme, this next set demonstrates Michelle’s knowledge of textures in an x-ray design. The almost glow-in-the-dark black and blue work of art features a different body part in x-ray, with a hand on each pinky, a skull on a middle finger, and a spine on an index.

Megan showed some love for Venom, the anti-hero from the Spider-Man franchise with this set. “This is probably my favorite anti-hero ever,” wrote Megan. The black and white nails capture the alien’s design with white polish used to mimic its liquid-like form. Decals include Venom’s bulging eyes, its sharp, pointy teeth, and signature slimy pink tongue.

Let us know which design was the most fire in the comments.