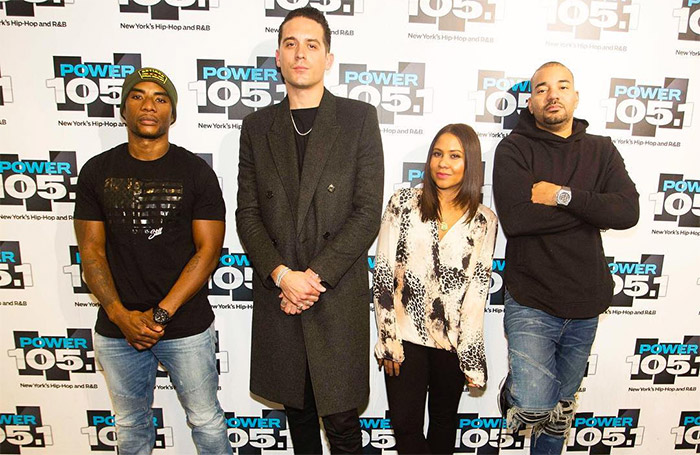 Just days after cutting ties with H&M over an fensive ad, G-Eazy stopped by “The Breakfast Club” to explain his decision.

The Oakland rapper addressed the situation by saying that he didn’t have to think twice about exiting the deal. “Contractually, there’s nothing in the contract that says, ‘If we do something racist, you get out the deal.’ If an artist does something bad, they pull the rug out instantly,” he said. “But when I saw that, feeling how I felt, it wasn’t even a conversation. It was just, ‘I’m out.’ Called my people like, ‘Get me out this. This is not cool. I’m not putting my name on this. This is not okay.’”

Although he didn’t explain how much money he left on the table, Gerald said that it wasn’t about financial gain. “I was excited about H&M,” he said. “That was a big opportunity to put clothes all around the world and do something I actually liked and was cool with. Then, I saw that happening and I was like, ‘I’m not cool with it.’”

After saying that he sacrificed “a lot” money, The Beautiful & Damned MC revealed that he doesn’t regret his decision. “I was buying moms a house f that check, period,” he added. “But I’ve always been a big believer that, if you believe in yourself, then this isn’t the last time it’ll come around. My value didn’t go nowhere.”

Elsewhere during the interview, Gerald addressed Halsey’s rumored cocaine use, his friends in the rap game, and why he doesn’t want to have children. He also spoke on white privilege, his rumored ex-girlfriend Lana Del Rey, and his “No Limit” collaborators A$AP Rocky and Cardi B. Read additional quotes from the interview below.

On Halsey’s Rumored Cocaine Use: “It is what it is. We’re in the middle the water. Somebody with a mile-long lens. That’s a long lens. Can I live? We’re literally in the middle nowhere, enjoying ourselves, it’s a holiday, whatever. That kind thing, leaving restaurants and paparazzi being outside, is new to me. It’s a weird thing not having that privacy to live. It’s a little weird but it’s whatever.

On Whether They Snorted Cocaine: “I don’t know. I was on a boat. Go figure. It’s New Year’s Day. It’s Miami. I’m on a yacht. What do you think I’m doing? You think I’m smoking weed?”

On Children: “I’m not having kids. Nah. Couches pull out, I don’t. Who knows? I’m just not in that place right now.”

On White Privilege: “I’m a white male. I’m privileged everywhere and I’m aware that. Everything is easier for me, period. In terms music, I still had to work to get my voice heard. I didn’t start rapping yesterday. I’ve been at this for over 10 years but I am aware that.”

On Friends: “E-40, Vic Mensa. I’ve known him forever. Puff gives me a lot advice. Puff’s a real one. Everybody back home. Mistah F.A.B. Kehlani. I was talking to her last night. She’s like a real sister. She’s one my best friends…We can damn near make an album together.”

On A$AP Rocky: “I’ve known Rocky forever. I opened his first New York show. I met Rocky right when ‘Peso’ came out, when he was first buzzing.”

On Cardi B: “I just think she’s incredible. Even before, with her mixtapes, I was watching and following her, her whole bring, image, and personality was this unapologetic. She was her. She was comfortable in her skin. She was not holding back. Not biting her tongue for nothing.”