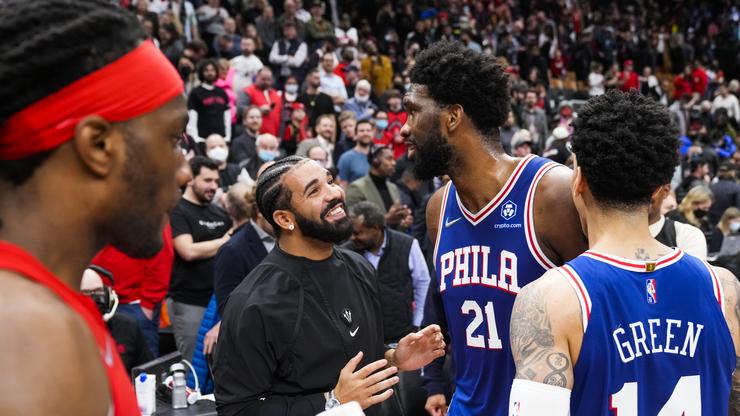 Joel Embiid got the last laugh in the end.

Last night was not particularly good for the Toronto Raptors. After going down 2-0 to the Philadelphia 76ers, the Raptors were looking to get back into the series with a big win at home. Despite jumping out to an early lead, the Raptors ended up losing the game in overtime. Joel Embiid of the Sixers put on a masterclass in the second half and overtime which ultimately allowed the 76ers to pull off the win that now gives them a 3-0 lead in the series.

Of course, Drake was sitting courtside at the game and throughout the match, he engaged in trash talk with Embiid. At one point, Drake said that Embiid wasn’t good enough to play in Toronto and that the team had his number. After the game, Embiid was able to give it right back to Drake, saying “That’s what you call a fucking superstar. Get your ass up. I’m coming for the sweep too. You better be there. You ain’t gon’ show up.”

Drake did not back down from the exchange as he retorted with “Okay. I’ll be there, what you mean? I’ll be there for that 3-1.” Needless to say, Drake is not scared of Embiid, however, with the series at 3-0 in favor of the Sixers, Drake should really start panicking. Unfortunately, basketball is not like hockey where 0-3 comebacks have become a real possibility. In the history of the NBA, such a comeback has never actually happened.

The Sixers are a team looking to prove a lot of people wrong, and if they can sweep the Raptors, then they will certainly be making a statement to the Miami Heat, who they will likely face in the second round.

You can check out the highlights from last night’s game, down below.