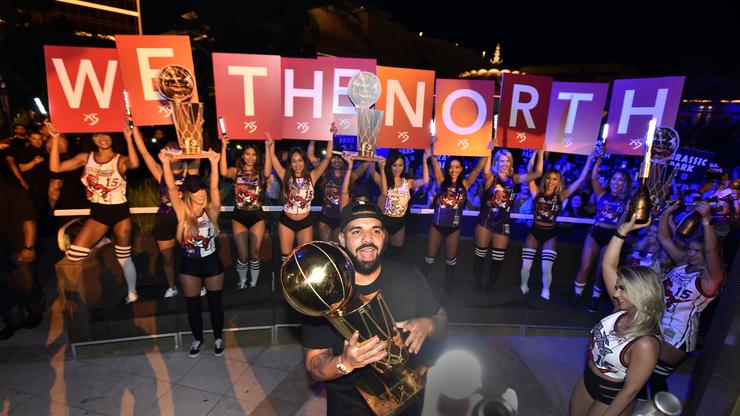 Drizzy made fun of himself while hooping at The Embassy in Toronto.

Ever since Drake revealed the full-size basketball court inside his Toronto estate, “The Embassy,” countless stories have come out of The Six God’s home gym.

From multiple tributes to the late Kobe Bryant, to the rec league Drizzy set up for he and his friends, to the news that the 34-year-old tore his ACL while on the hardwood, it seems like there is always something basketball-related going on north of the border and Drake’s always involved in it.

Following his return to the Toronto Raptors’ broadcast last week and basketball YouTuber K Showtime poking fun at Drizzy for his infamous “Breathe, breathe, don’t tell me to breathe … ayo, bring me a shot!,” IG Live which has recently been recirculating on TikTok, the “0 to 100” rapper was back on the court, this time playing 2 on 2 alongside Showtime himself.

Rocking a Toronto Raptors #6 jersey with “The Boy” scrawled across the back, Drizzy splashes a couple of tough jumpers and even slides down to the block to show off his post moves. Drake and Showtime eventually win their matchup 12-10 but it wouldn’t be a Drake basketball video without a couple jokes flying around.

Along with Drake’s complaints that his opponents tried to mess with his three-point release and sneakily switched basketballs mid-game, Wheelchair Jimmy had to take a second to acknowledge the most-recent Drake meme floating around the internet.

After getting his shooting arm slapped mid-shot, Drizzy let out a hearty “Jeez Louise, man!” as he walked to the top of the key to check up. And as a not-so-subtle wink at all the meme creators out there, he dropped a, “Drake’s the type of guy to say jeez Louise,” before ensuring that he would be making the foul call and taking the ball back.

Whether or not Drake’s basketball abilities will ever take him further than The Embassy’s courts is yet to be seen, but based on the fact that we seem to get a new hoop video every couple of weeks points to the fact that Drizzy takes pickup hoops seriously. And like every 34-year-old dude still playing pickup, he’s going to talk his sh*t and make a couple jokes in the process.

Check out Drake’s full 2v2 matchup below and let us know what you think in the comments.