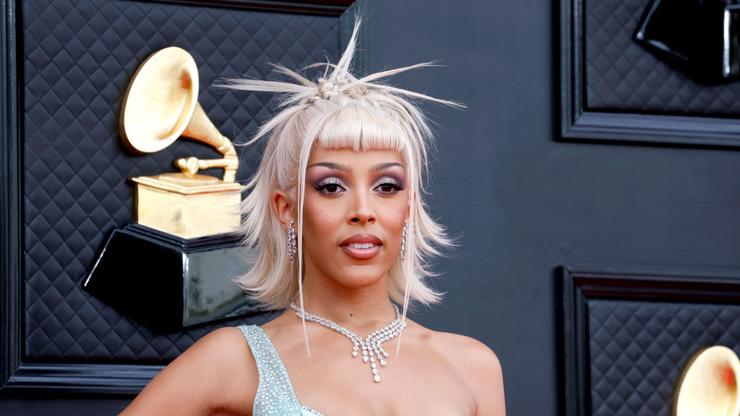 Photo by Frazer Harrison/Getty Images for The Recording Academy

The Grammy Award winner took to Twitter with an album update for her fans.

Doja Cat has taken a few months off since taking over the world with her third studio album Planet Her. Now the Grammy award winning artist is prepping for her highly anticipated follow-up and assures fans it will be different from her prior projects. Earlier this month, Doja shared with CR Fashion Book that her upcoming album will be inspired by rave music. “I’m very into this ’90s German rave kind of vibe right now and it’s really fun,” the “Juicy” star shared.

“I know that’s kind of the trend at the moment but I loved that stuff as a kid and now that I can express it (obviously, I couldn’t buzz my head and wear a furry bra and have a belly button piercing back then), I’m sort of embracing that.” Dropping more hints about her forthcoming album, Doja recently tweeted that her next project will be strictly R&B vibes. “I’m doing an R&B album,” she tweeted. “Straight R&B and no rap at all.”

Fans flooded the comments with positive feedback. One fan tweeted, “Not even gon lie, I’m actually excited to hear what this gon sound like. Doja get a lot of hate but she’s talented frfr.” While rappers like OT Genesis used the opportunity to shoot their shot at being on a Doja album. “Put me on there,” he commented.

Aside from music, the platinum selling artist has been taking time to work on her personal wellbeing in between projects. Last month, she celebrated her sobriety, marking 70 days Vape free. Doja also had the Internet in a frenzy after revealing her shaved head and eyebrows. “I won a GRAMMY and traveled the f***ing globe I’ve had a #1 and I went platinum. I make hit after hit after hit and you all want me to look f****** for you so that you can go home and ***k your ***ks all day long while you live in your mothers basement. Go **** yourselves.”

Are you here for R&B Doja? Share your thoughts below.