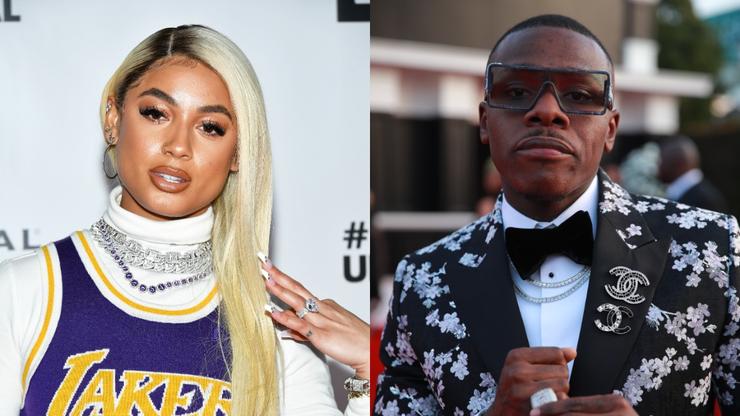 DaniLeigh and DaBaby had an insane Sunday night.

Just two days after unfollowing everyone on Instagram to focus on herself, the “Easy” singer went live on the platform, and was being filmed while breastfeeding their daughter. During the broadcast, the former couple can be heard arguing and DaBaby attempts to explain that he is filming her for his safety. Following the live broadcast, in which DaBaby claimed DaniLeigh refused to leave his house, the “SUGE” rapper released a statement.

“I would like to swiftly remove myself from any of the “hostile” behavior put on display moments ago, this here thing has gone far enough for shawty to crash out on her own and it saddens me because I still got a queen to raise,” he wrote. “This last hour has been documented for my safety and business done based on my reputation. With multiple threats of setting up a internet scheme & a person refusing to not let me go me and somebody else here knew to record her. I done been beat on and yelled at and chased around like one [of] them fatal love attraction type girls. But I knew to keep it together … End of the day no big deal I don’t want no charges pressed or nothing I just want her peacefully removed … My focus right now is solely on this new project and this LiveShowKillaTour starting Nov. 26th. Hate shawty went out that way but that ain’t my business I’m a father first always, and always will be.

DaBaby clarified that it was really him writing the statement, assuring “This really me typing too no PR.”

DaniLeigh responded with a couple statements of her own.

“Hey guys, since Baby wanna put up a “statement” with his cap ass I’ll put mine up … so we been living with each other for the past three months since our baby been born … doin us … and tonight he wanna come in the room talking bout “I need to go” don’t matter where I go .. mind u … I have a newborn child, so he said I can go to a hotel … this man is mad bc I had a Plan B sent to his condo …,” she posted on her IG story. “He prob want me out so he can f*ck on his baby lmother and other h*es. Who been knowin we been together this whole time, while I just had my first child… this all goes to say that this man is a f*cking coward !!!!”

Continuing to tell her side of the story, DaniLeigh said she was sleeping after cooking for DaBaby when he told her she needed to leave his house, and took a couple more shots at the father of her child.

“Damn I really shoulda just listened to the cap ass internet about this man!!!! Ima learn and Ima grow … but this right here, ain’t it. And I’m sorry to my baby that her father is kicking her out her home at three months,” she lamented. “Lame ass using this situation to promote his EP/tour … literally putting the date on his “statement.” My God. My poor baby got a lameeeee for a father damn. Everyone go enjoy the show! And listen to Sticked Up/Levels which was written about me since I’m the crazy one in this “love affair.”

Following the initial Instagram stories, the former couple exchanged a few more virtual jabs, but things escalated when DaBaby called the police to have DaniLeigh removed from his home. When they arrived, DaniLeigh went live again, and berated both DaBaby and the police, claiming that she would not speak with authorities since DaBaby was the one who called them.

While DaBaby said in his original statement that he did not want to press charges, it is unclear how things will unfold from here. Despite DaniLeigh stating that she wanted to get away from social media, Sunday night’s situation is sure to keep her, and her relationship with DaBaby in the spotlight for a considerable amount of time.

Keep it locked to HNHH for any updates throughout the next couple of days.