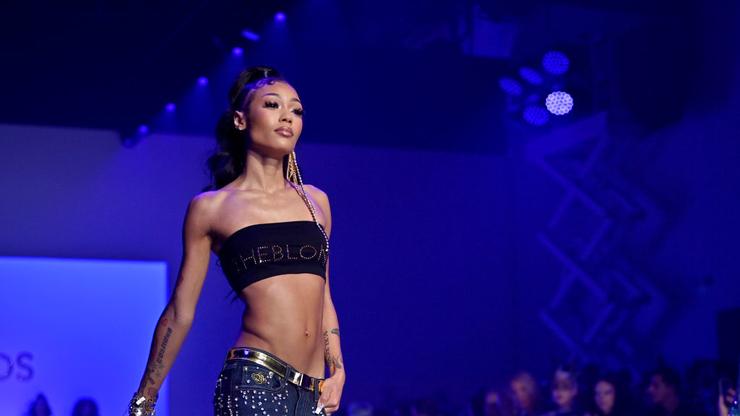 The Boston-born recording artist made her runway debut during The Blonds show earlier this week.

Now that New York Fashion Week has wrapped up for another season, the world has been left to take inspiration from designer duds that made their debut on the runway, as well as from the countless celebrities and fashionistas who showed off their own style while sitting in the front row.

From the looks of her Instagram feed, 25-year-old Coi Leray had a jam-packed week in the Big Apple, not only making her runway debut at The Blonds show but also performing (and attending shows) alongside her good friend Saucy Santana.

This isn’t the first time the Trendsetter artist turned heads at NYFW – back in September of 2021 she stepped out for the Moschino show in a black and white suit with an extremely cropped top that left little to the imagination.

For past seasons, Leray sat in the audience to watch Christian Cowan, Hardware LDN, Maisie Wilen, Sergio Hudson, and LaQuan Smith show off their latest designs, but we would argue that her latest roster of shows proves that the “Fly Sh!t” artist is a force to be reckoned with in the world of fashion.

Keep scrolling to see Coi’s bold (and sometimes barely there) looks for the S/S 2023 season.

The Boston-born creative kicked things off while attending the Marni show in a cropped pink and black striped sweater, complete with extra long, droopy sleeves. She added blue striped pants and chunky platform sandals to complete the look and wore her hair in high, curly pigtails.

Next, Leray linked up with Madonna to see what Marc Jacobs was working on with his Heavn collection. At the same time, they shared plenty of laughs and even caught a performance from Doja Cat.

For the Givenchy show, the “Blick Blick” hitmaker donned a more casual outfit, styled by @mazurbate. Still sporting her hair in the same curly pigtails, she layered a short sleeve tee over a long one, complete with a pair of sky-high leather boots.

Afterward, Coi met up with “Booty” hitmaker Saucy Santana for the Luar runway. While the former opted to dress in schoolboy chic clothing, the latter was photographed in a monochrome black look, complete with layers of Cuban link chains and unique sunglasses.

The rap diva took a break from stunting through the streets to share a video of her and a friend dancing near Greeley Square, paying tribute to Lil Saint while looking like “Moose from Step Up 2,” as someone in the comments hilariously pointed out.

Later in the week, Leray and Santana linked up once again, this time to step out in style for the Area S/S 23 show. While the 28-year-old continued with his streak of wearing all black, his gal pal lit up the night in a sparkly bra top, an extra short skirt, and glitzed-up floral shoes that made their way up her entire legs.

Next on the Massachusetts native’s list was the Coach show, and not long after that she pulled together an all-pink outfit from brands like Juicy Couture, Dior, and GODBODY to attend Vogue‘s World Afterparty.

And as if all of that weren’t enough excitement for one week, the Now or Never artist was also tapped by The Blonds to make her fashion show debut in their presentation – a moment she was clearly geeked about.

For her final (and one of her most revealing) outfits, Leray stunned in a super lowcut bodysuit from Alexander Wang, worn with thigh high boots, a jacket hanging off of her arms, and of course, some flashy jewelry to bring the whole ensemble together.

Which of Coi’s NYFW S/S 23 looks is your favourite? Sound off in the comments below, and tap back in with HNHH later for more streetwear news updates.