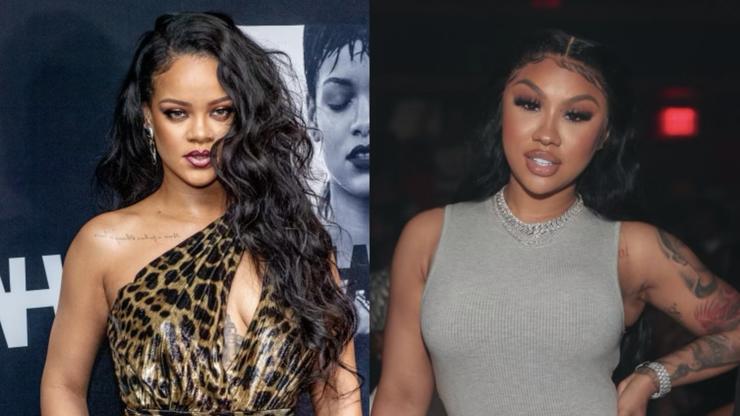 Many people are pointing out that Rihanna also snatched Draya Michele’s deal for her comments about Megan Thee Stallion and Tory Lanez.

Ari Fletcher’s questionable comments during her appearance on the Don’t Call Me White Girl podcast are continuing to land her in hot water. Although nothing has been officially confirmed, fans have been speculating that Rihanna has likely cut off the 26-year-old’s brand deal with her lingerie company after publicly “making light” of domestic violence.

In case you missed it, the mother of one sat down for an interview during which she opened up about her relationship with Moneybagg Yo, and how the “Time Today” rapper has helped her grow up and let go of some of her more toxic habits. At one point, Fletcher admitted that she used to have a habit of throwing temper tantrums and acting as if she was about to leave in hopes of having a man pull his gun out and intensify the situation.

“Like, pull your gun out and show me like, ‘bitch leave. I wish you would walk out the door,'” she explained to her friend when recalling an ideal fantasy. While Fletcher and the podcast host laughed during their conversation, listeners at home didn’t have the same reaction.

As clips from the interview began receiving attention online, video vixen Apple Watts harshly and publicly called out the Chicago-born socialite for what she said. “Ari, like, you’re beautiful, but bitch! Humble yourself,” the Love & Hip-Hop: Miami star ranted on Instagram.

“You’re like a tampon, so stuck up. We get it! You got money. We get it. But you ain’t gotta be an asshole to bitches who got beat up by n*ggas. Bitch, you ain’t got beat up before or something! Because you need to humble yourself. A bitch with money. This how you know project bitches get money.”

Many people have been praising Rihanna for taking such quick action (if the rumours are true, that is), while others couldn’t help but bring up 36-year-old model Draya Michele, who also had her Fenty sponsorship snatched following her comments about the Megan Thee Stallion and Tory Lanez shooting incident.

Others still came to Fletcher’s defence, offering up the opinion that her “kinky fetish” has nothing to do with her work as an Instagram influencer.

Elsewhere in the Fenty world, Rihanna announced that later this year she’ll have five brick-and-mortar locations opening across the U.S. to sell her lingerie and other Savage collection products – read more about that here, and check back in with HNHH for more updates on Ari Fletcher’s deal with the billion-dollar brand.