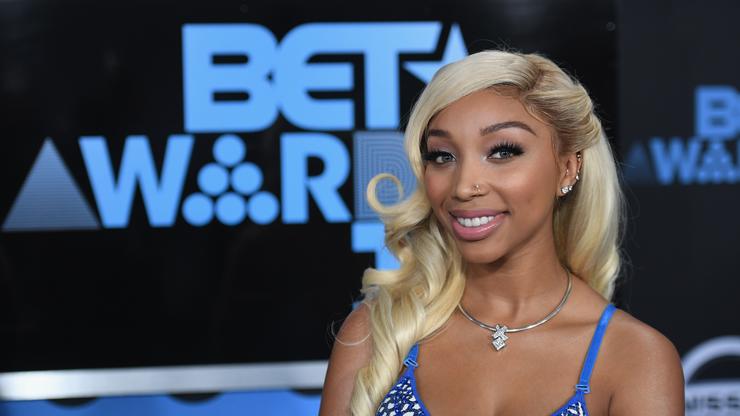 She also joked that she didn’t want boyfriend Bandhunta Izzy to watch her give birth because she doesn’t “even fart in front of” him.

New mother Zonnique Pullins is back to work. Weeks ago, the singer and The Mix host was missing from her virtual Fox Soul talk show and it was announced that she was off delivering her baby girl. Zonnique and boyfriend Bandhunta Izzy were excited about their new addition, but prior to delivery, Zonnique had a few concerns about the birthing process. Upon her return to her Fox Soul series, Zonnique shared news about her little girl, what her first weeks of motherhood have been like, and why giving birth is “really nasty.”

“The baby is just so precious guys. She’s so perfect,” said Zonnique. “Like, I’m spoiling her already, I’m trying not to spoil her but I can’t help it. I wanna say she looks like me, but she’s starting to look a lot like her dad so, sad case.” She was asked what the delivery process what like and Zonnique admitted it wasn’t what she was expecting because it was “a lot easier” than what she anticipated. However, it certainly wasn’t pleasant.

“The experience is, it’s really nasty, I’m just going to start there,” she said as her co-hosts laughed. It’s common for mothers to defecate during birth and that was something Zonnique didn’t want to do. “The whole time I’m like, ‘Don’t sh*t, don’t sh*t,’ because I don’t even fart in front of my boyfriend. Stuff like that is really nasty to me, so he’s just watching it and he’s saying little comments and I’m like—it’s just really nasty but it’s a really beautiful experience, you know?”

She also admitted that when she first saw her daughter, she thought she was “cute” but not “the most beautiful baby I’ve ever seen.” Before giving birth, people tried to tell her that once she laid eyes on her daughter she would be the most attractive baby, but Zonnique said she doesn’t think newborns are cute when they’re first delivered. “As the hours went by I’m like, ‘Yeah, she’s gorgeous.'” Watch the episode of The Mix below.