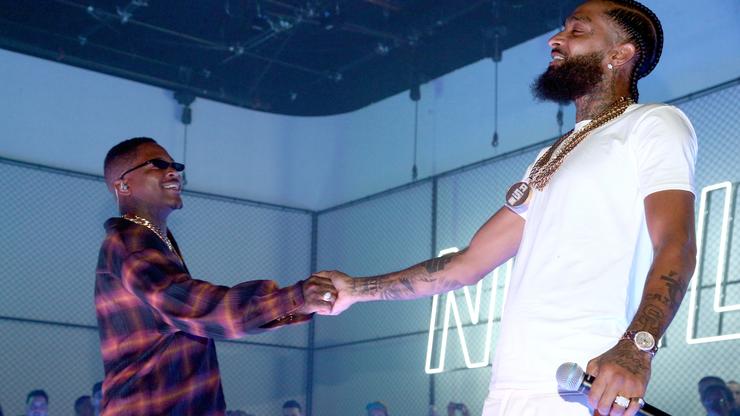 He also talked about creating “FGT (F*ck Donald Trump)” with Nipsey back in 2016 months before the last presidential election.

The case against Eric Holder, the man accused of murdering Nipsey Hussle at close range, presses on as the rapper’s fans await news of a trial. It’s been over a year and a half since Nipsey was shot to death in front of his Marathon Clothing store in Los Angeles, and the slain artist has been memorialized worldwide. His family, friends, fans, and collaborators continue to pay tribute to Nipsey, including good friend YG who didn’t hesitate in verbalizing his grief following the rapper’s death.

These days, you may hear a Nipsey Hussle mention from YG lyrically, but the L.A. rapper isn’t as vocal about his fallen friend. In an interview with the Los Angeles Times, YG shared that he’s chosen to commemorate Nipsey’s life privately and creatively. “I want to let the homie rest,” he said. “I’m not gonna fall back and just talk about bro in interviews. Not just in breath, but on my records.”

In the wake of the recent protests and looming 2020 election, YG and Nipsey’s 2016 single “FGT (F*ck Donald Trump)” has once again gained traction. YG recalled a conversation with Nipsey prior to releasing the song. “I asked Nip, ‘You sure you want to put this out?’” YG said. “He was like, ‘We already get backlash. We already can’t do this and this and this. So f— it, let’s make it worth something.”

As far as his next album is concerned, My Life 4 Hunnid may show a different side to YG. The rapper told the L.A. Times that he has shifted from his “turnt up and lit” tracks to instead reflect America’s current climate. “I had to go tap into that. I’m so used to being like ‘I don’t give a f— , f— you, boom bam.’ Now I’m like, ‘Damn, I’ve got to really go get into some emo s—.”