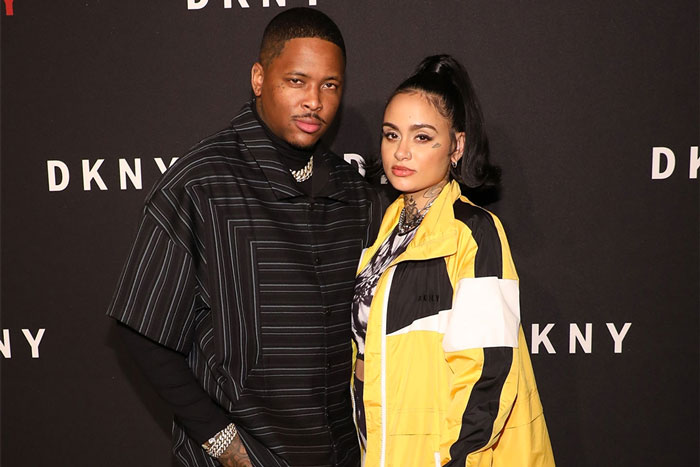 Is there trouble in paradise for YG and Kehlani?

The “Big Bank” rapper was spotted kissing another woman after leaving Todd Gurley’s Halloween party on Wednesday in L.A. The Shade Room has obtained video YG parked outside Poppy nightclub in a red Lamborghini. He is seen talking to a mystery brunette on the curb before opening the door and letting her in.

YG puts his arms around the woman and pulls her in for a kiss. Their makeout session was interrupted by the girl’s friend who tells her, “Wrap this shit up, bitch. Figure it out.”

TSR STAFF: Tanya P.! @Tanyaxpayne ______________________ #TSRExclusive: Roommates, we broke the story that #YG and #Kehlani were ficially an item, but looks like the tea doesn’t stop there! Just last night #YG got caught slippin’ after trying to get at a girl outside Poppy Night club in Los Angeles. ______________ Looks like after a fun night with his crew, YG hopped in a fire red lambo but right before he took f, our video shows he’s talking to a girl who is crouching down for a cute lil’ chit chat. The convo must have been good cause a few seconds later YG lifts his doors to get up close & personal. ________________ After the exchange, the mystery girl’s friend was RET TO GO and wasn’t happy about their cupcake sesh. You can hear her telling her friend to “wrap this sh*t up.” The mystery girl wrapped it up (thanks to her friend) and both women went their way, YG also left with his squad. ________________ The timing is interesting given Kehlani JUST posted a photo them together just a day ago. There’s no word if YG met the mystery woman that night or–read more by clicking the link in the bio! (: Backgrid)

The video surfaced just one day after Kehlani posted a photo her and YG together at a Hennessy event. It has since been deleted from Kehlani’s Instagram page, but other photos the couple remain up.

The rapper, 29, and singer, 24, went public with their relationship during New York Fashion Week last month. Kehlani shared several photos them kissing and showing PDA while at dinner. “cats out the bag,” she captioned the pics.

cats out the bag.

Prior to their romance, they had been friends for years. “5 years in the making,” Kehlani wrote in a since-deleted tweet.

While their relationship status remains unclear, Kehlani shows f her chemistry with Teyana Taylor on the latter’s new single “Morning.” The song and video are set to debut Friday.

UPDATE: YG has addressed the cheating allegations. He claims he was drunk, but did not kiss the mystery woman despite video footage appearing to show otherwise.

An eyewitness tells TMZ that the woman requested a photo with YG while he was sitting in the passenger seat his car. He wasn’t in the mood to take a photo but she persisted. However, there was no kiss.

He regrets putting himself in the situation and insists that he and Kehlani remain a “strong couple.” As for Kehlani, she is reportedly “all Gucci with her man.”

“He was drunk, got carried away and it was very regretful for putting himself in that situation and hurting Kehlani,” a rep for the rapper tells The Shade Room. “He has no romantic connection to the girl, just a drunken moment carried away.”