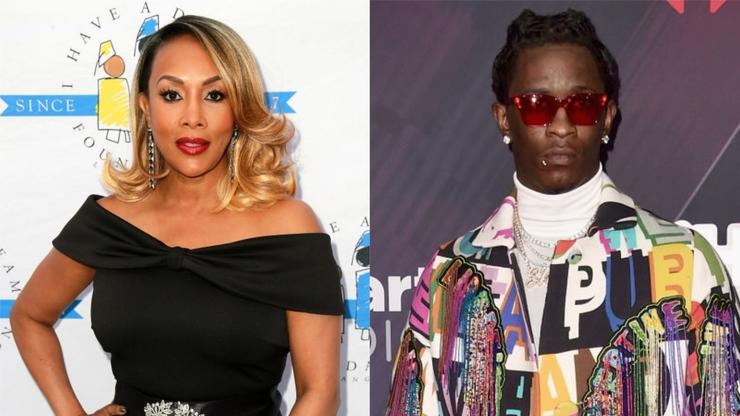 Vivica A. Fox said that her “cockroach” comment was meant in the “kindest” way.

Can we agree that it’s never right to compare somebody to a cockroach? Vivica A. Fox is learning that the hard way, despite the fact that she should have already known. On the latest episode of Cocktails with Queens, the actress earned a lot of backlash for referring to Young Thug as a “sexy ass looking cockroach” after her co-host Claudia Jordan asked if she thought the rapper was attractive.

“He’s just like a good sexy ass looking cockroach,” said Vivica A. Fox about Young Thug. The conversation was introduced when the ladies started speaking about Thug’s claims about Jay-Z in a recent interview. “And I don’t mean that mean. He looks like– it’s like the hair, you know what I mean? He’s got rockstar qualities. Like, he would be a great animation character.”

Claudia Jordan asked Vivica if she would “let the cockroach live” if she found him in the kitchen, to which Fox said, “I meant that in the kindest term, though. Cause his features, they’re just very– but he’s very rockstar, he loves his diamonds, he loves fashion, he loves pushing buttons and he makes good music.”

She concluded by saying that Young Thug would not hold a candle to Jay-Z in a Verzuz battle, which the ladies believe Thugger was after when he made his comments about having more stadium hits than the legend.

As expected, Vivica A. Fox is experiencing some rough backlash over her use of the word “cockroach” and we wouldn’t be surprised to see an apology or an explanation in the coming hours/days.